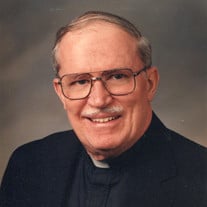 Fr. James Fangman, age 86, of Carroll, passed to heaven, on Thursday, October 5, 2017 after a long battle with Alzheimer’s Disease, surrounded by his sister Beth and his loving nurses and caregivers in St. Paul, Minnesota. Mass of the Christian Burial will be celebrated at 10:30 a.m., Thursday, October 12, 2017 at Holy Spirit Catholic Church in Carroll. The celebrant will be the Most Reverend R. Walker Nickless, Bishop of the Sioux City Diocese. Homilist will be Fr. John McGuirk. Con-Celebrants will be Fr. Robert Fangman, and Fr. Kevin Richter. Music will be by Barb McDermott, Mary Blinn, and the Holy Spirit Choir. Casket Bearers will be Matt Fangman, Steve Fangman, Dr. Nick Fangman, Emily Gainor, Elizabeth Maulik, and Roger Maulik. The Carroll 4th Degree Knights of Columbus will form an honor guard for the funeral mass. Burial will be in Mt. Olivet Cemetery in Carroll with military honors conducted by the Carroll American Legion. Visitation will begin at 5 p.m. on Wednesday at Holy Spirit Church in Carroll where there will be a Christian Wake Service at 7 p.m. followed by a rosary by the Carroll 4th Degree Knights of Columbus. Visitation will resume at 9:30 a.m. on Thursday at Holy Spirit Church and will continue until time of the funeral mass. Memorials can be sent to the Alzheimer’s Society, 7900 W. 78th St, Minneapolis, MN 55439 for research. Funeral arrangements are under the direction of the Sharp Funeral Home in Carroll and online condolences may be left for the family at www.sharpfuneral.com. Father James Edward Fangman was born on April 7, 1931 at Ames, Iowa; the son of Sylvester and Bernadette (Maxwell) Fangman. He grew up in Boone, Iowa, and attended Sacred Heart School, before graduating from Boone High School. He attended St. Paul Seminary in St. Paul, Minnesota, and Mount St. Bernard Seminary in Dubuque, Iowa. Fr. Jim was ordained a Priest on June 1, 1963 at the Cathedral of the Epiphany in Sioux City, Iowa. Father Jim said his first Mass at his home parish of Sacred Heart in Boone, and served in parishes in Estherville, Willey, Ogden, Kingsley, Marcus and elsewhere. Prior to realizing his priestly vocation, Jim served two years aboard the Navy’s USS Bradford during the Korean Conflict where he sustained hearing loss. Father Fangman was preceded in death by parents Sylvester and Bernadette Fangman; brothers Charles and Thomas Fangman; and sister Miriam (Fangman) Moderhock. He is survived by his brother, Fr. Robert, also a priest, of Carroll and his sister, Elizabeth wife of Roger Maulik of Saint Paul, Minnesota and many nieces and nephews.

Fr. James Fangman, age 86, of Carroll, passed to heaven, on Thursday, October 5, 2017 after a long battle with Alzheimer&#8217;s Disease, surrounded by his sister Beth and his loving nurses and caregivers in St. Paul, Minnesota. Mass of... View Obituary & Service Information

The family of Fr. James Fangman created this Life Tributes page to make it easy to share your memories.

Send flowers to the Fangman family.