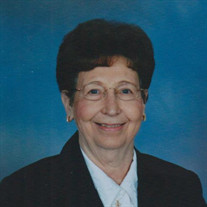 Irene Riesenberg-Koithan, age 91, of Carroll, died Saturday, March 26, 2022 at Journey Senior Service in Carroll. Mass of the Christian Burial for Irene Riesenberg-Koithan will be celebrated at 10:30 a.m. Thursday, March 31, 2022 at Holy Angels Catholic Church in Roselle. The Celebrant will be Fr. Timothy Friedrichsen. Concelebrant will be Fr. Steve Brodersen. Music will be by Hannah Kerkhoff and the Holy Angels Choir. Lector will be Lindsy Pudenz. Gift Bearers will be Irene’s sisters: Lynette Lehrter and Elaine Fleskes. Casket bearers will be her grandchildren: Brad Riesenberg, Cory Riesenberg, Kyle Riesenberg, Jeffrey Riesenberg, Brandon Kerkhoff, and Bentley Rummerfield. Burial will be in the Parish Cemetery. Visitation will be held at the Sharp Funreal Home on Wednesday from 5-7 p.m. There will be a rosary prayed at 6 p.m. The casket will be moved to Holy Angels Church on Thursday morning where visitation will continue from 9:30 to 10:15 a.m. Funeral arrangements are under the guidance of the Sharp Funeral Home in Carroll and online condolences may be left for Irene’s family at www.sharpfuneral.com Irene, the daughter of Anton “Tony” and Bertha (Kraus) Broich was born on September 30, 1930, in Willey, Iowa. She grew up near Maple River and attended St. Francis School. Irene met Ed Riesenberg and were married on November 8, 1949 at St. Francis Catholic Church in Maple River. To this union four children were born: Jerry, Joan, Joleen, and Danny. The Riesenberg’s farmed on the western edge of Roselle. With a hard work ethic, Irene helped in all aspects of the grain and livestock operation. Irene was an excellent cook and enjoyed baking for her family. She had a large garden, which was always weed free. They enjoyed snowmobiling together along with euchre card playing with the neighbors. They moved to Carroll in 1984. Irene worked for Renze Hybrids in the fall sorting corn. Her and Ed were also contract carriers for the Daily Times Herald. They also enjoyed polka dancing. Ed passed away in 1999. Irene met and married George Koithan of Mapleton, Iowa. They were married June 25, 2005 at St. Lawrence Church in Carroll. Together they enjoyed a trip to Germany, polka dancing, taking car rides to see the family. Irene is survived by her children: Jerry (Barb) Riesenberg of Roselle, Joleen (Dale) Kerkhoff of Templeton, Danny Riesenberg of Lincoln, NE; son-in-law Dale (Jane) Eischeid of Carroll; 9 grandchildren, 16 great-grandchildren with one on the way; husband George Koithan of Mapleton, his children: Tom (Rose) Koithan of Des Moines, and Dan (Carol) Koithan of Mapleton. Irene is also survived by her sisters: Lynette Lehrter of Carroll and Elaine (Bob) Fleskes of Minnesota; sisters-in-law: Millie Broich of Carroll and Lois Broich of Omaha, NE as well as many nieces, nephews, and other extended family and friends. She was preceded in death by her husband Ed in 1999; daughter Joan Eischeid in 1973; her parents, Tony and Bertha Broich; siblings: Raymond Broich, Louie Broich, Adeline Dameron, Lucille Fischer, Rosie Long, and Lorraine Kennebeck; brothers-in-law: Leonard Fischer, Al Lehrter, Howard Long, and Verlin Kennebeck.

The family of Irene Riesenberg-Koithan created this Life Tributes page to make it easy to share your memories.

Send flowers to the Riesenberg-Koithan family.