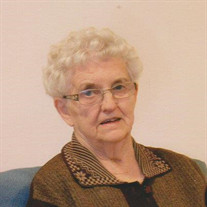 Inez Halbur, 91 of Breda, died early Thursday morning, October 18, 2018, at St. Anthony Regional Hospital in Carroll. Mass of the Christian Burial will be celebrated at 10:30 a.m., Tuesday, October 23, 2018 at St. Bernard’s Catholic Church in Breda. The Celebrant will be Fr. Mark Stoll. Con-Celebrant will be Fr. Gary Snyder. Music will be by Marilyn Hundling and the St. Bernard’s Choir. Lector for the funeral mass will be Jessica Rench. Gift Bearers will be: Elizabeth Halbur, Laura Wernimont, Brittany Hermsen, and Lisa Neppel. Eucharistic Ministers will be: Ron Pickhinke and Chris Koster. Casket Bearers will be: Dean Wernimont, Michael Halbur, Josh Halbur, Joel Halbur, Brent Halbur, Jason Pickhinke, Andy Koster, Brian Koster, and Matt Koster. Burial will be in St. Bernard’s Cemetery in Breda. Friends may call at the Sharp Funeral Home in Breda after 4 p.m. on Monday where there will be a rosary at 5 p.m. and a Christian Wake Service at 7 p.m. Funeral arrangements are under the direction of the Sharp Funeral Home in Breda and online condolences may be left at www.sharpfuneral.com. Born on September 24, 1927 at Carroll, Iowa, Inez was the daughter of Herman and Bernadine (Schulte) Bruning. She attended country school and later graduated from St. Bernard’s High School. On September 15, 1955, Inez was united in marriage to Norman Halbur at St. Bernard’s Catholic Church in Breda. The couple made their home northwest of Breda where they farmed. Inez was a devoted homemaker, raising their family, and loved cooking, baking and canning. She was known for her famous sugar cookies. In 1988, Inez and Norman moved into Breda. She also enjoyed crocheting, sewing, and quilting. Inez thoroughly enjoyed her trips to the casino. Her greatest joy was spending time with her children, grandchildren, and great-grandchildren. Inez was a member of St. Bernard’s Church in Breda. Inez is survived by her children: Rosie Wernimont of Breda, Rick (Becky) Halbur of Wall Lake, Don (Joan) Halbur of Breda, Bonnie (Ron) Pickhinke of Sac City, Karen (Chris) Koster of Breda, Sharon Halbur of Breda, and Steve (Stacie) Halbur of Danbury; 22 grandchildren; 11 great-grandchildren; one sister, Ivadell (Jerome) Langel of Templeton; her sisters-in-law and brothers-in-law: Larry (JoAnn) Halbur of Denison, Bernard (Marita) Meiners of Coon Rapids, Bill (Marie) Halbur of Tucson, AZ, Margaret (Tom) Denker of Manning, and Pat (Joe) Goblirsch of Jesup; as well as other extended relatives and many friends. Inez was preceded in death by her parents; her husband Norman in 2004; her grandson Kyle Halbur; her daughter-in-law, Mary Lou Halbur; her sisters: Violet Bruning, Ardis Bauer, and Florabell Brincks; and her brother, Arlo Bruning.

The family of Inez Halbur created this Life Tributes page to make it easy to share your memories.