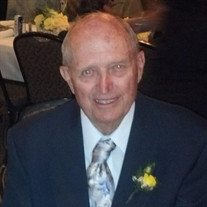 Howard G. Drees, 92 of Carroll, died Thursday, May 12, 2022 at St. Anthony Nursing Home in Carroll. Mass of the Christian Burial will be celebrated at 11 a.m., Tuesday, May 17, 2022 at St. Lawrence Church – St. John Paul II Parish in Carroll. The Celebrant will be Fr. Kevin Richter. Music will be by Kathy Halbur and Kathleen Macke. Lectors for the Funeral Mass will be Megan Schreck and Mallory Bowdish. Gift Bearers will be: Lisa Bowdish, Lynne Meyers, Larie Brokaw, Madison Drees, and Courtney Miller. Casket Bearers will be: Nick Satterlee, Jon Schreck, Brian Schreck, Cole Hoffman, Patrick McCarty, Matthew McCarty, Alex Drees, Derek Drees, and Joshua Miller. Burial will be in Mt. Olivet Cemetery in Carroll with military honors conducted by the Carroll American Legion. Visitation will be held from 4:30-6:30 p.m. on Monday at the Sharp Funeral Home in Carroll. There will be a Christian Wake Service at 6:30 p.m. Additional visitation will be from 10-10:45 a.m. on Tuesday at the church. In lieu of flowers, memorials may be left at the funeral home or the church for the Houlihan Access Sauk Rail Trail. Funeral arrangements are under the guidance of the Sharp Funeral Home in Carroll and online condolences may be left for Howard’s family at www.sharpfuneral.com. Howard, the son of Louis and Theresa (Eischeid) Drees, was born on April 25, 1930, in Carroll, Iowa. He grew up in Carroll and attended school at Carroll High School. Howard proudly served his country as an Airman First Class Regular in the Air Force at RAF Bentwaters Air Force Base in Suffolk, England, from 1952 to 1954 when he was honorably discharged. On October 18, 1958, Howard was united in marriage to Patricia A. Houlihan at SS Peter and Paul Catholic Church in Carroll. The couple lived and raised their family in the Carroll area. Howard was a 2nd generation owner of Drees Heating & Plumbing, Inc. purchasing the business in 1968 with his brother, Doug Drees and brother-in-law, Kenneth Kammin. They continued the growth of the company, making Drees Co. a successful mechanical contractor in Central Iowa until his retirement in 2002. Howard was a member of the Carroll Country Club, Knights of Columbus, American Legion, and the St. John Paul II Parish. In his spare time, Howard enjoyed golfing. He liked planting trees, gardening, and growing grapes. He loved to watch things grow and gave all of the flora on his land special attention because he wanted to see what it would become, kind of like his kids. In later years, he enjoyed his time on his acreage by tinkering in his shop and recreating or designing whatever he thought needed improvement. Howard was an entrepreneur in work and in life. Lastly, a special memory his children have is when Howard sang his favorite part of the 12 Days of Christmas. Can you hear him barreling out, “5 Golden Rings?” (You just sang it didn’t you?) Left to celebrate his life are his children: Michelle & Brett Satterlee, Omaha, NE, Judy & Greg Schreck, Carroll, Connie & Russ Hoffman, Scranton, IA, Karen & Denny Kasperbauer, Carroll, Howie & Sara Drees, Carroll, and Holley Drees, Des Moines. Grandchildren: Nick (Patty) Satterlee, Lisa (Nick) Bowdish, Jon (Abby) & Brian (Megan) Schreck, Lynne (Jeremy) Meyers, Larie (Charlie) Brokaw, Cole (Nicole) Hoffman, Patrick (Kayla) & Matthew McCarty, Madison, Alex (Aisha)& Derek Drees, Josh (Heather) & Courtney (Jordan Waller) Miller and several great grandchildren, his brother, Don (Jane) Drees of Carroll. His sister-in-laws, Jane (Dick) Wiederhold of Goodyear, AZ, Elaine (Steve) Schleisman Colorado Springs, CO and brother-in-law, Michael (Beth) Houlihan of Minneapolis, MN as well as many nieces, nephews, and other extended relatives. Howard was preceded in death by his wife, Patricia Drees; his son, Jerry in infancy; his parents, Louis & Theresa Drees; his sisters: Maxine Collison, LaVonne Daeges and Dorothy Drees, his brothers: Louis & Doug Drees and brother-in-law, Lee Houlihan.

The family of Howard Drees created this Life Tributes page to make it easy to share your memories.

Send flowers to the Drees family.