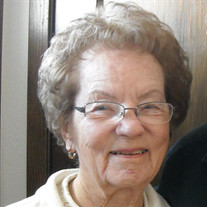 Hilda Schulte, 96 of Carroll, died Wednesday, November 6, 2019 at Accura Healthcare of Carroll. Mass of the Christian Burial will be celebrated at 10 a.m., Saturday, November 9, 2019 at St. John Paul II Parish – St. Lawrence Church in Carroll. The Celebrant will be Fr. Shinoj Jose. Music will be by Jane Heithoff and the St. Lawrence Choir. Lector for the Funeral Mass will be Jim Elliston. Gift Bearers will be Hilda’s granddaughters. Casket Bearers will be Hilda’s grandsons. Burial will be in Mt. Olivet Cemetery in Carroll. Friends may call at the Sharp Funeral Home in Carroll after 5 p.m. on Friday where there will be a rosary at 6 p.m. The casket will be moved to St. Lawrence Church on Saturday morning where additional visitation will be held from 9-9:45 a.m. Memorials may be left at the funeral home or the church in Hilda's name for a later designation. Funeral arrangements are under the guidance of the Sharp Funeral Home in Carroll and online condolences may be left for Hilda’s family at www.sharpfuneral.com. Born on January 20, 1923 in Halbur, Iowa, Hilda was the daughter of Peter and Margaret (Potthoff) Hausman. She attended country school and then assisted her family with their farm operation. Hilda moved to Brooklyn, New York with her sister Mildred during the war and were both employed at Beech-Nut Gum Packing Co. She returned to the Carroll area and was united in marriage to Cyril Schulte on May 7, 1947 at St. Augustine Catholic Church in Halbur. Cyril and Hilda made their home in Carroll where she was a devoted mother, housewife and did various volunteer work including New Hope Village Store and St. Anthony Hospital Gift Shop. Throughout the years Hilda and Cyril enjoyed dancing and bingo every Saturday night. Hilda was an avid bridge player, seamstress and baker. Her specialties were brownies, pies, and cinnamon rolls; each of the grandchildren had their favorites. Hilda was a member of St. Lawrence Parish. She had a devotion to her family, her faith and was always the eternal optimist. Left to celebrate her life is her husband of 72 years, Cyril Schulte of Carroll; her children: Sherry Rogers of Omaha, Joan (Jack) Blair of Windsor, CO, Bob (Karin) Schulte of Williamsburg, IA, Mary Janning of Omaha, and Tricia (Jim) Elliston of Omaha, 14 grandchildren, 8 great-grandchildren; her brother, Andrew (Sally) Hausman of Arizona; her sisters-in-law: Esther Hausman of Halbur and Virginia Hausman of Michigan; her brother-in-law, Omer “Doc” Langenfeld of Carroll; as well as other extended relatives. Hilda was preceded in death by her parents; her son Jim Schulte in 1971; her daughter, Joyce Schulte in 1978; her son-in-law, Bruce Rogers; and her siblings: Sally (Bill) Stickrod, Norma (Ted) Schmidt, Clarence Hausman, Arthur Hausman, Mildred (Gene) Grethen, Sylvia (Don) McCormick, Dorothy (Leonard) Irlmeier, and Eugene Hausman.

The family of Hilda Schulte created this Life Tributes page to make it easy to share your memories.

Send flowers to the Schulte family.