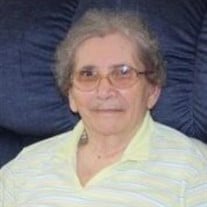 A recording of Helen's funeral mass may be found at this link: https://youtu.be/xdOLF7G-18Q. Helen Wiskus, age 100, of Carroll and formerly of Dedham, died Saturday, January 2, 2021 at Accura Healthcare in Carroll. Mass of the Christian Burial will be celebrated at 10:30 a.m. Friday, January 8, 2021 at St. Joseph’s Catholic Church in Dedham. Instrumental music will be by Cindy Bauer. Lector will be Dave Herring. Casket Bearers will be Scott Mueggenberg, Ben Mueggenberg, Brian Fleshner, Matthew Fleshner, Dave Herring, and Dave Dilbeck. Burial will be in the parish cemetery. Visitation without the family present will be held from 9:30-10 a.m. Friday at the church in Dedham. Those in attendance at the funeral ceremonies will be required to wear a face covering and abide by all COVID-19 guidelines. In lieu of Flowers, memorials may directed to St. Joseph’s Parish in Dedham, or Kuemper Catholic Tuition Assistance Fund. Funeral arrangements are under the guidance of the Sharp Funeral Home in Carroll, and online condolences may be left at www.sharpfuneral.com. Helen the daughter of Frank and Theresia (Hoffman) Berger was born on May 7, 1920 in rural Dedham. She attended St. Joseph’s School in Dedham. After her formal education she assisted on the family farm, and helped local families with their young children. On February 15, 1955 Helen was united in marriage to Bernard Wiskus at St. Joseph’s Catholic Church in Dedham. The couple made their home in Dedham where Helen was a devoted homemaker. In addition to being a homemaker Helen worked as a school cook for St. Joseph’s School for 17 years. Over the years she also served many weddings and anniversaries at the Dedham Legion Hall. Helen enjoyed playing Bingo, watching sports including her children and grandchildren, the Iowa Hawkeyes and the Chicago Cubs. Most of all she enjoyed spending time with her children, grandchildren, and great-grandchildren. Helen will be remembered for her apple crisp and delicious fudge she made every Christmas for her children and grandchildren. Helen was very active with the Dedham American Legion Auxiliary serving as a president, and serving for over 60 years. Helen was a member of St. Joseph’s Parish in Dedham, and St. Joseph’s Ladies Guild. Left to celebrate Helen’s life are her daughters: Renee (Darrell) Mueggenberg of Arcadia, Marie (Richard) Herring of Hammond, Indiana, and Joan Fleshner of Carroll; nine grandchildren, nineteen great-grandchildren, and numerous nieces, nephews, and other extended relatives. Helen was preceded in death by her parents; her step-mother Elizabeth (Reineke) Berger, half-sister Anna Mae Berger; 2 half-brothers in infancy: Frederic and Louis; her husband Bernard in 1978, parents-in-law: John and Mary Wiskus, and a great-granddaughter Michaela Herring; as well as Bernard’s Brother, Sisters and their spouses.

A recording of Helen's funeral mass may be found at this link: https://youtu.be/xdOLF7G-18Q. Helen Wiskus, age 100, of Carroll and formerly of Dedham, died Saturday, January 2, 2021 at Accura Healthcare in Carroll. Mass of the Christian... View Obituary & Service Information

The family of Helen Wiskus created this Life Tributes page to make it easy to share your memories.

A recording of Helen&#39;s funeral mass may be found at this link:...

Send flowers to the Wiskus family.