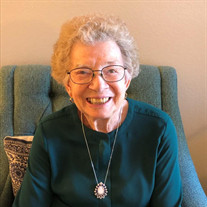 Helen Knobbe Johnson passed away peacefully on April 13, 2022. Helen is survived by her devoted children David (Carol) Knobbe, Debra Jurvich, Lois (Paul) Pasley, and Roger(Donna) Knobbe; her grandchildren Anne(Carlos) Robles, Christine(Adam) Kitagawa, Michael Knobbe, Chase (Karla) Knobbe, and Peri (David) Tresslar: her brothers and sisters Lambert (Donna) Klocke, Jerry (Betty) Klocke, Jim(Louann) Klocke, Ronnie (Joleen) Klocke, Larry (Pat) Klocke, Sharon (Eldon) Wright, Wayne(Carol) Klocke, and Marlene (Jim) Wille. Also survived by 5 great grandchildren and numerous nieces and nephews. Helen was born to Clem and Elizabeth (Wiskus) Klocke on August 19, 1928, in Dedham, Iowa. She married Roy Knobbe in 1952 and farmed with him near Willey, Iowa until his death in 1978. In 1988, Helen moved to Brea, California to be closer to her grandchildren. She married Del Johnson in 1994 and enjoyed a retired life of travel and adventure until Del’s death in 2008. Helen moved to Ivy Park at Bradford in 2015, where she enjoyed a relaxed life of Bingo, Poker, crafts and other activities. Helen was a fierce lady. Despite only an eighth-grade education, she raised four children and sent them all to college. In her 50’s, Helen took piano lessons and completed her GED. She was a school lunch cook, a 4 H leader, a hospital cleaner, a nanny, a seamstress, a clerk, and an assistant apartment manager. She also was a talented crocheter, chef and gardener. She volunteered her time with the Dedham American Legion Auxiliary, the Willey and Dedham Ladies Church Guilds, the church choirs, and the Brea Senior Center. To say that Helen will be missed is an understatement. In addition to her parents and husbands, Helen was preceded in death by a son-in law Ray Jurvich, a grandson Andrew Jurvich, and brothers and sisters Frances Whisnant, Louise Costello, LeRoy Klocke, Maxine McFarland, Jessie Fast, Donna Lee Lowe, and Lorraine Gettler. Services for Helen Johnson will be on May 14 at 2:00 PM at Memory Garden Memorial Park and Mortuary in Brea, CA (455 W Central, Brea, CA). Mass of the Christian Burial and internment will be at St Mary’s in Willey, IA at a later date. The family would like to thank Ivy Park at Bradford and Vitas Hospice of Orange County for their loving care to our mother and grandmother during this time. In lieu of flowers, donations may be made to Vitas Hospice of Orange County, CA., the American Legion Women’s Auxiliary, Dedham, IA., or for Masses to a church of your choice.

The family of Helen Knobbe Johnson created this Life Tributes page to make it easy to share your memories.