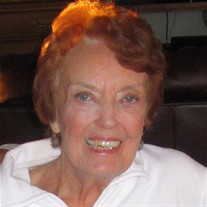 Gloria Schenkelberg, age 93, of Carroll, died Monday, October 23, 2017 at St. Anthony Regional Hospital in Carroll, Iowa. Mass of the Christian Burial will be celebrated at 10:30 a.m. Friday, October 27, 2017 at Holy Spirit Catholic Church in Carroll. The celebrant will be Fr. Kevin Richter. Music will be by Mary Blinn and Terri Prenger, with Amy Sherman as soloist. Lector will be Abigail Irlbeck. Gift Bearers will be Shari and Alvie Irlbeck. Eucharistic Minister will be Tim Toohey. Casket Bearers will be Rich Schenkelberg, Gene Schenkelberg, Alvie Irlbeck, Matthew Irlbeck, Taylor Sporrer, and Tanner Johnson. Burial will be at Mt. Olivet Cemetery in Carroll. Friends may call at the Sharp Funeral Home in Carroll, after 5 p.m. on Thursday, where there will be a Christian Wake Service held at 7 p.m. The casket will be moved to Holy Spirit Church on Friday morning where visitation will resume at 9:30 a.m., and continue until the time of the funeral mass. Funeral arrangements are under the direction of the Sharp Funeral Home in Carroll, and online condolences may be left for Gloria’s family at www.sharpfuneral.com. Gloria, the daughter of Paul and Mildred (Montgomery) Langenfeld, was born on October 4, 1924 in Galva, Iowa. At a young age her family moved to Carroll, Iowa where she grew up, attended school, and graduated from St. Angela’s Academy. Upon her graduation, she worked with her parents, who operated Langenfeld Studios. They traveled throughout the Midwest, decorating and designing murals for churches. Following the sudden passing of her father, Gloria and her mother continued to operate Langenfeld Studios for several years. On February 3, 1958, Gloria was united in marriage to Paul Schenkelberg at Holy Family Catholic Church in Lidderdale, Iowa. The couple made their home in Carroll, where Gloria cherished being a homemaker and raising and caring for their three children. Gloria enjoyed cooking, sewing, and taking family vacations. Her other hobbies included playing cards and flower gardening. Most of all, Gloria enjoyed the time she spent with her children and grandchildren. Gloria was a member of Holy Spirit Parish in Carroll. Left to celebrate Gloria’s life are her children and their spouses: Rich (Lisa) Schenkelberg of Carroll, Shari (Alvie) Irlbeck of Carroll, and Gene Schenkelberg of Omaha, Nebraska; her grandchildren: Abigail Irlbeck, Matthew Irlbeck, and Taylor Sporrer; her brother-in-law: Larry Schenkelberg of Carroll; sister-in-law: Virginia Schenkelberg of Le Mars. Also surviving is an uncle, whom Gloria always considered as her brother, Louis (Mary) Montgomery of Waterloo; as well as many nieces, nephews, and other extended relatives. Gloria was preceded in death by her parents; step-father, Gil Howard; husband Paul Schenkelberg in 1992; their infant son Louis; and her brothers-in-law and sisters-in-law: Al Schenkelberg, Donna (Al) Snyder, Marvin Schenkelberg, and Bill (Jean) Schenkelberg. Also preceding Gloria in death are her aunts and uncles, that she always considered her siblings: Del (Lucille) Montgomery, Everett (Jeanette) Montgomery, Elaine (Tony) Stalzer, and Ed (Rita) Montgomery.

The family of Gloria Schenkelberg created this Life Tributes page to make it easy to share your memories.

Send flowers to the Schenkelberg family.