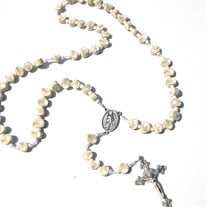 Gloria Alba Metrick (née DeBenedetti), 90, passed away Thursday, June 6th, 2019 in Carroll, Iowa with her daughter at her side. She was survived by her children, Gloria Ann (David) Slomczynski and Edward Joseph Metrick, her sister Joann (the late Richard) Egdorf, and numerous nieces, nephews, great nieces and great nephews. She was preceded in death by her husband, Edward Jerome Metrick, her sisters Louise (the late William) Kubinski and Lucille (Cyril), her brothers André and Raymond, and her parents, Joseph and Eleanor (née Govoni). She graduated Joliet Township High School (now the Central Campus) in 1946 and went on to business college. She married Edward Jerome Metrick, also of Joliet, in 1957. The little girl who wanted to be Amelia Earhart joined the Civil Air Patrol at the wrong time during WW II to become a female service pilot, herself, but she had a lifelong love of planes, transportation, and travel. During the WW II era, she was also a member of the American Red Cross. Before marriage, she was proud to work her way up at Walgreen’s from Clerk to Assistant Pharmacist to Bookkeeper. After marriage, she spent the following years as a “Household Engineer,” a term coined by one of her favorite authors, Erma Bombeck. She was a Band and Orchestra Parent member, just to mention a couple groups. In addition, she worked on the SOS (Save Our School) campaign to save Joliet Township High School - Central Campus. In her later years, she took delight in the smallest of joys and, until the very end, still got enjoyment out of many of them. With her husband being in the US Army, they moved a number of times during their early years of marriage. In her final move with her daughter and son-in-law, in the discussion about whether she would like to move to Iowa, she was excited about the move because, as she said, she’d never lived in Iowa and she’d never lived in a small town – two perfectly good reasons to go. She retained her excitement in seeing new places and having new adventures. Gloria’s last great adventure will be marked with a mass at St. Patrick’s Church in Joliet, IL. A lunch will be held at Al’s Steak House, following the visit to the cemetery. Per Gloria’s wishes, cremation rites have been accorded by Sharp Funeral Home in Carroll, IA. Arrangements are entrusted to the Fred C. Dames funeral home in Joliet, IL. There will be no services nor visitation held at either funeral home.

Gloria Alba Metrick (née DeBenedetti), 90, passed away Thursday, June 6th, 2019 in Carroll, Iowa with her daughter at her side. She was survived by her children, Gloria Ann (David) Slomczynski and Edward Joseph Metrick, her sister Joann (the... View Obituary & Service Information

The family of Gloria Metrick created this Life Tributes page to make it easy to share your memories.

Send flowers to the Metrick family.