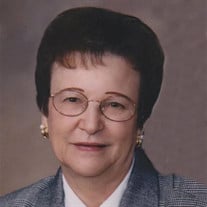 Gloria D. Grimsman, 89, of Carroll, Iowa, died Friday, February 2, 2018, at the University Of Iowa Hospital. A funeral mass will be held at 10:30 a.m., Tuesday, February 6, 2018 at St. Lawrence Catholic Church in Carroll. The Celebrant will be Fr. Kevin Richter. Music will be by Kate Cuddy and the St. Lawrence Choir. Special music will be by Gloria’s granddaughter, Sarah Paulson. Lectors for the funeral mass will be Gloria’s daughters, Denise Grimsman and Deb Droessler. Gift Bearers will be Gloria’s son, Doug Grimsman and Gloria’s grandsons, Nickolas Grimsman and Garrett Grimsman. Burial will be in the Carroll City Cemetery. Visitation will begin at 9:30 a.m. on Tuesday at St. Lawrence Church and will continue until time of the funeral mass. In lieu of flowers memorials may be left at the church for the University of Iowa Hospital Palliative Care. Funeral arrangements are under the direction of the Sharp Funeral Home in Carroll and online condolences may be left for Gloria's family at www.sharpfuneral.com. Born on July 15, 1928, in Wynot, Nebraska, Gloria was the daughter of Herman and Maude (Gassman) Schulte. She graduated from St. Angela Academy in 1946. On June 27, 1949, Gloria was united in marriage to John “Jack” Grimsman in Carroll. Together they raised three children. Gloria had a few jobs over her lifetime. She worked alongside her mother detasseling corn and inspecting eggs in an egg factory. She worked for 27 years as a telephone operator and was a member of the Telephone Pioneers. She also volunteered in the coffee shop at St. Anthony’s Hospital. Gloria was an excellent seamstress; she made most of her daughters’ clothes when they were young. Her grandchildren recall her delicious cinnamon rolls and other baked goods. She loved going dancing with Jack on Saturday nights along with a wonderful group of friends who also got together occasionally to play cards. Reading mystery novels was a great comfort to her in her later years. Gloria will be remembered as a kind, loving wife, mother, and grandmother. She was a member of St. Lawrence Catholic Church. Left to cherish her memory are two daughters, Deb (Bruce) Droessler of Maquoketa and Denise (Joe Graham) Grimsman of Washington, DC; her son Doug (Karla) Grimsman of Iowa City; five grandchildren; four great-grandchildren; her brother Cyril (Hilda) Schulte of Carroll; her sister-in-law Betty Mason Grimsman of Lake View; brothers-in-law Doc Langenfeld of Carroll and Duane Grimsman of California; as well as many nieces, nephews, other extended relatives, and many friends. Gloria was preceded in death by her parents; her sisters Evelyn Goecke, Grace Langenfeld, and Marilyn Kanne; and her brothers Ray, Vincent, Bernard, and Jerry Schulte.

Gloria D. Grimsman, 89, of Carroll, Iowa, died Friday, February 2, 2018, at the University Of Iowa Hospital. A funeral mass will be held at 10:30 a.m., Tuesday, February 6, 2018 at St. Lawrence Catholic Church in Carroll. The Celebrant will... View Obituary & Service Information

The family of Gloria Grimsman created this Life Tributes page to make it easy to share your memories.

Send flowers to the Grimsman family.