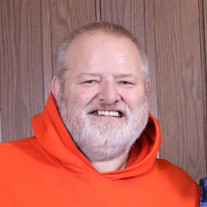 Gary Wolterman, age 66, of Carroll, died Friday, November 27, 2020 at Greene County Medical Center in Jefferson. Mass of the Christian Burial will be celebrated at 11 a.m. Wednesday, December 2, 2020 at Holy Spirit Church-St. John Paul II Parish in Carroll. The Celebrant will be Fr. Kevin Richter. Instrumental Music will be by Jane Heithoff. Lector will be Kyra Wolterman. Honorary Casket Bearers will be Gary’s son Michael Wolterman, and Gary’s brother, Larry Wolterman. Casket Bearers will be Gary’s daughter Maria Wolterman; Gary’s brothers: Dale Wolterman, John Wolterman, and Mike Wolterman; Gary’s brother-in-law Rev. David Loeschen; and Gary’s Nephews: Brian Wolterman, Bert Madden IV, and Sean Culligan. Gary will be laid to rest in Mt. Olivet Cemetery in Carroll. A Private Family Prayer Service will be held on Tuesday at the Sharp Funeral Home in Carroll, with Gary’s brother-in-law; Rev. David Loeschen officiating. A Public Visitation without the family present will be held from 10 – 10:30 a.m. on Wednesday at Holy Spirit Church in Carroll. Those in attendance of the services for Gary are required to wear a face mask and abide by all current COVID-19 restrictions. Those wishing to mail a memorial may direct it to Gary Wolterman Family, C/O Sharp Funeral Home, 226 W. 8th Street, Carroll, IA 51401 Funeral arrangements are under the guidance of the Sharp Funeral Home in Carroll, and online condolences may be left for Gary’s family at www.sharpfuneral.com. Gary was born on March 15, 1954, to Wilbur “Web" and Helen (Becker) Wolterman. He was the fourth child of eleven. He was raised in Carroll. Gary was baptized at St. Joseph’s Church. He attended St. Joseph Elementary that later became Holy Spirit. Gary graduated Kuemper High School in 1972. During his life, Gary worked many different jobs. He started his work life out doing odd jobs with his dad. He went on to work for Badding Construction. He moved on to build with a traveling construction company. He moved back to Carroll and eventually started to work at Bowie Manufacturing in Lake City. He spent the next 23 plus years building veterinarian boxes until an accident disabled him. On September 16, 1995, Gary was united in marriage with Lisa Stangl at Holy Spirit Church. They began their marriage living in Lake City. In 2000, Gary and Lisa were blessed with two children, Maria and Michael. The family would later move to Carroll to be closer to family. Later Gary and Lisa were blessed with 4 granddaughters. At time of death, Gary was living in Regency Park in Jefferson due to an accident that required physical therapy. Due to Covid, he spent from May until November isolated from his family. The family spent time visiting Gary through the window and daily phone calls. Then on November 26th, Lisa was blessed with being with him as he passed. Left to celebrate Gary’s life is his wife of 25 years Lisa Wolterman of Carroll; their daughter Maria Wolterman of Sioux City, IA, and their son Michael Wolterman of Carroll; and their grandchildren: Sophia, Amyra, Jaxon, and Letty. His brothers: Dale (Tina) Wolterman of Carroll, John Wolterman of Carroll, Larry (Marilou) Wolterman of North Pole, AK, and Mike (Bonnie) Wolterman of Sioux City; his sisters: Debra (Reverend David) Loeschen of Denison, Cindi (Kevin) Cregen of Creston, Pat (Bert) Madden of Carroll, and Linda Culligan of Carroll as well as many nieces, nephews, and extended relatives. Gary was was preceded in death by his parents, Wilbur and Helen; his parents-in-law: Robert and RoseMary Stangl; sister: Margaret Wolterman; brother: James Wolterman; his brothers-in-law and sister-in law: Mike Culligan, Danny Fry, and Delores Wolterman; and his nephews: Jerry Wolterman and Chris Wolterman.

The family of Gary Wolterman created this Life Tributes page to make it easy to share your memories.

Send flowers to the Wolterman family.