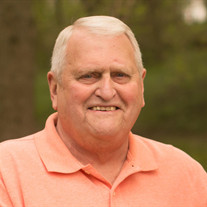 Gary Venteicher, 78 of Carroll, died Saturday, March 23, 2019 at Mercy Medical Center in Des Moines, Iowa surrounded by his family. Mass of the Christian Burial will be celebrated at 11 a.m., Wednesday, March 27, 2019 at St. John Paul II Parish – Holy Spirit Church in Carroll. The Celebrant will be Fr. Kevin Richter. Con-Celebrant will be Fr. Gary Snyder. Music will be by Dr. Franklyn Busby, Pastoral Musician, Anne Tigges, and the Holy Spirit Resurrection Choir. Mass servers will be Cole Collison and A.J. Schreck. Lector for the funeral mass will be Steve Vollstedt. Holly Venteicher, Casey Bruch, Erin Looney-Bruch and A.J. Canoles will present the offertory gifts. Honorary Casket Bearers will be: Katie Canoles, Kristen Vollstedt, Ashley Sibenaller, Cailin Vollstedt, Chloe Venteicher, Emily Venteicher, and Ava Venteicher. Casket Bearers will be: Nate Bruch, T.J. Bruch, Alex Bruch, Jacob Bruch, Jared Vollstedt, Austin Sibenaller, Grant Sibenaller, Logan Sibenaller, Nic Venteicher, and Collin Venteicher. Burial will be in Mt. Olivet Cemetery in Carroll with military honors conducted by the Arcadia American Legion. Friends may call at the Sharp Funeral Home in Carroll after 4 p.m. on Tuesday where there will be a rosary at 5 p.m. by the Carroll Knights of Columbus and a Christian Wake Service at 7 p.m. The casket will be moved to Holy Spirit Church on Wednesday morning where additional visitation will be held from 10-10:45 a.m. Funeral arrangements are under the direction of the Sharp Funeral Home in Carroll and online condolences may be left for Gary’s family at www.sharpfuneral.com. Born on March 16, 1941 at Carroll, Iowa, Gary was the son of Leonard and Armella (Haverkamp) Venteicher. He attended St. Augustine’s School in Halbur, St. John’s School in Arcadia and later graduated from Kuemper Catholic High School in 1959. Following his schooling Gary farmed near Halbur and also served in the Army National Guard from 1963-1967. On September 2, 1967, he was united in marriage to Betty Mayer at Sts. Peter and Paul Catholic Church in Carroll. While he was engaged in farming, Gary served on the Carroll County Pork Producers Board of Directors, and was a 4-H Leader for 17 years. In 1994, Gary began his working career at Wittrock Motors in Carroll where he was employed until his retirement in 2007. After his retirement he committed his time as Treasurer of the Carroll Moose Lodge. In his younger years, Gary enjoyed playing fast pitch softball and was later inducted into the Super Fan Hall of Fame. Gary enjoyed fishing, and being active in his grandchildren and great-grandchildren’s activities He was a member of the Arcadia American Legion where he served as Past Commander and Adjutant Chaplin, Carroll Knights of Columbus, St. John Paul II Parish-Holy Spirit Church, Carroll County Pork Producers, Past President of St. Augustine Parish Board of Directors, Cal-Car Board of Directors, Kuemper School Board, and also served as Kuemper Ball Co-Chairs in 1992. Gary is survived by his wife Betty Venteicher of Carroll; his children: Jill Bruch of Roselle, Janell (Steve) Vollstedt of Manilla, Wendy Sibenaller of Roselle, Chris Venteicher of Omaha, Todd Venteicher of Carroll, Pat Venteicher of Carroll and Jamie (Holly) Venteicher of Carroll; 17 grandchildren; 8 great-grandchildren; his sisters: Judie (Gary) Frideres of Ankeny, Sharon Secrist of West Des Moines, Nancy (Gene) Riesberg of Ankeny and Cindy (Mike) Haubrich of Arcadia; his sister-in-law, Joyce (Tom) Pudenz of Lidderdale; as well as many nieces, nephews, and other extended relatives. Gary was preceded in death by his parents, Leonard and Armella Venteicher; his parents-in-law, Paul and Theresa Mayer; his son-in-law, Leo Sibenaller; his great-granddaughter, Talia Bruch; and his brother-in-law, Morris Secrist.

The family of Gary Venteicher created this Life Tributes page to make it easy to share your memories.

Send flowers to the Venteicher family.