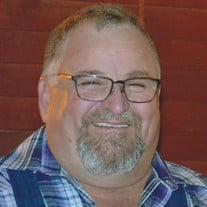 Gary Pudenz, 61 of Lytton, died Tuesday, September 24, 2019 near Pomeroy, Iowa from injuries sustained from an automobile accident. A Funeral Mass will be celebrated at 11 a.m. Wednesday, October 2, 2019 at St. John Paul II Parish - Holy Spirit Church in Carroll. The Celebrant will be Fr. Kevin Richter. Music will be by Jane Heithoff, and the Holy Spirit Resurrection Choir. Lectors will be Marcy Clark, and Abby Pudenz. Gift Bearers and Honorary Casket Bearers will be Gary’s Nieces and Nephews. Burial will be private. Visitation will be held from 5-7 p.m. Tuesday at the Sharp Funeral Home in Carroll. Additional visitation will be held from 10-10:45 a.m. Wednesday morning at Holy Spirit Church. In Lieu of flowers memorials may be directed to the family for a later memorial designation. Funeral arrangements are under the guidance of the Sharp Funeral Home in Carroll, and online condolences may be left for Gary’s family at www.sharpfuneral.com. Gary Paul Pudenz, the son of LaVern and Dolores (Wieland) Pudenz was born on July 2, 1958 at Carroll, Iowa. He was raised on a farm near Carroll, and graduated from Kuemper Catholic High School. Gary lived with his sister Jean for a short time before finding a home by Churdan, and was employed with a farmer until he Gary decided to move to Arizona. While in Arizona he worked for an implement dealer until he moved back to Iowa to work for John Deere in Sac City, and helped a friend farm in the fall. Gary had a big heart, and would drop everything to lend a helping hand. Even though he did not have any children of his own, he loved to be around his nieces, and nephews. Gary also enjoyed smoking and barbequing meats, tinkering with farm equipment, and farming. He will be remembered for his love of people, and his generous spirit. Gary is survived by his siblings: Jean (Keith) Walker of Paton, Mark (Patti) Pudenz of Odessa, MO, Rick (Helen) Pudenz of Glidden, Mary Jo (Bill) Rice of Okeechobee, FL, and June (Paul) Carstensen of Cambridge; a sister-in-law: Cindy Pudenz of Glidden; as well as many nieces, nephews, great-nieces, great-nephews, and other extended family. Gary was preceded in death by his parents; his brother, David Pudenz in 2013, and a sister at birth, June Marie.

The family of Gary Pudenz created this Life Tributes page to make it easy to share your memories.