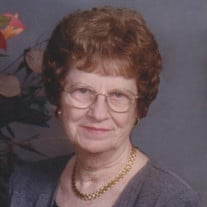 Freda Axman, age 89 of Dedham, died on Tuesday, July 13, 2021 at Accura Healthcare of Carroll. A Funeral Mass will be celebrated at 10:30 a.m., Saturday, July 17, 2021 at St. Joseph’s Catholic Church in Dedham. The Celebrant will be Fr. Kevin Richter assisted by Deacon Louis Meiners. Music will be by Cindy Bauer and the St. Joseph’s Choir. Lectors for the funeral mass will be Molly Ebbers and Josh Axman. Gift Bearers will be Freda’s great grandchildren: Cade and Finlee Ebbers, Anna Catalina, and Becca Giraldo. Burial will be in St. Joseph’s Cemetery in Dedham. The Dedham Ameircan Legion Auxiliary will for an honor guard for the service. Friends may call at the Sharp Funeral Home in Carroll after 5 p.m. on Friday where there will be a Christian Wake Service at 7 p.m. There will be an additional visitation on Saturday prior to the mass from 10:00 a.m. until 10:30 a.m. at the church. Funeral arrangements are under the guidance of the Sharp Funeral Home in Carroll and online condolences may be left for the Axman family at www.sharpfuneral.com. Born on March 19, 1932, Freda was the daughter of Fred and Anna (Sterner) Kasperbauer. She attended St. Joseph’s Grade School in Dedham and later attended Carroll High School. On July 12, 1952, Freda married Russell Axman at the Naval Air Force Base in Norman, Oklahoma. Upon Russell’s honorable discharge the couple returned to Dedham. Freda was a homemaker and worked seasonal jobs for various different companies. In 1986, Russell and Freda purchased Axman Construction which they owned and operated until their retirement. Freda was a lifelong member of St. Joseph’s Catholic Church, was a member of the Ladies Guild, and she was a member of the Dedham American Legion Ladies Auxiliary. Anything Russell did, Freda was always a part of, or there to help. She enjoyed trips to the casino, traveling, bowling, playing cards, hosting family, attending social gatherings, and she loved attending her grandchildren’s activities. Freda is survived by her children: Pam Schmitz of Omaha, Bill Axman of Carroll and Terry Axman of Carroll; 7 grandchildren; 6 great-grandchildren; her sister, Sharon Grote of Fonda; her sisters-in-law: Marcy (John) Cook of Carroll and Carol Ann Axman of Dedham; as well as other extended relatives and many friends. Freda was preceded in death by her parents; her husband Russell; her son Rick Axman; her son-in-law, David Schmitz; her daughter-in-law, Patty Axman; her granddaughter, Ronda Downey; her grandson, Michael Schmitz; and her siblings: Walford Kasperbauer at the age of 4, Irene Fowler, and Rita Morris. For many years, Freda and Russell were brought supper every night, given rides to doctor visits, and taken grocery shopping by Carol Ann Axman (Russell’s sister). Even after Russell’s passing in 2019, Carol Ann continued to do these things, and more, for Freda. Freda’s family would like to thank Carol Ann for the time, dedication and love given to their mom. These acts of kindness mean the world to them.

The family of Freda Axman created this Life Tributes page to make it easy to share your memories.