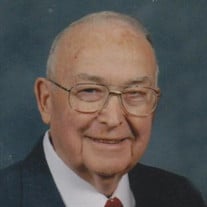 Francis “Frank” Case, age 91, of Carroll, died Saturday evening, December 5, 2020 at SunnyBrook of Carroll. Mass of the Christian Burial will be celebrated 10:30 a.m. Wednesday, December 9, 2020 at St. John Paul II Parish- Holy Spirit Church in Carroll. The Celebrant will be Fr. Kevin Richter. Instrumental music will be by Jane Heithoff. Casket Bearers will be Frank’s grandchildren: Michelle Sigler, Travis Case, Diane Walstrom, Matt Case, Tim Case, Jennifer Lohrmann, Alex Case, Emily Lamp, and Claire Case. Burial will be in Mt. Olivet Cemetery in Carroll with military honors conducted by the Carroll American Legion. Visitation without the family present will be held from 9:30 to 10:30 a.m. on Wednesday morning at Holy Spirit Church in Carroll. Those in attendance will be required to wear a mask and abide by all Covid-19 restrictions. Those wishing to mail a memorial may direct it to the Francis Case Family C/O Sharp Funeral Home, 226 W. 8th Street, Carroll, IA 51401 Funeral arrangements are under the guidance of the Sharp Funeral Home in Carroll, and online condolences may be left for Frank’s family at www.sharpfuneral.com. Francis, the son of Edward and Cecilia (Green) Case was born on November 7, 1929 on a farm near Anita, Iowa. He grew up on a farm between Portsmouth and Logan, Iowa. Frank attended country school, and graduated from St. Mary’s High School in Portsmouth. After high school he attended college in Kansas before being inducted into the United States Army where he proudly served our country during the Korean Conflict. Upon his honorable discharged he returned to the Midwest. On April 7, 1953 he was united in marriage to Mary Zimmerman at St. Joseph’s Catholic Church in Earling. The couple lived in Fonda while Frank was employed with First National Bank of Fonda. In 1955 Frank started an office for the Defiance State Bank in Dow City. While in the bank he prepared income taxes for farmers, and owned and operated his own real estate and insurance agency, in addition to the daily tasks of the bank. Frank was also active in the Dow City Community, serving as the school board secretary for 25 years, as well as serving St. Mary’s Parish in multiple capacities. Frank and Mary were avid fans and supporters of high school athletics in Dow City. Frank was a member of the 4th Degree Knights of Columbus. In 1994 Frank and Mary retired to Carroll. In retirement Frank was an active volunteer at Holy Spirit Parish, The Carroll V.A. Clinic, and St. Anthony Hospital. Frank enjoyed the Carroll community and meeting new friends. He socialized at the Carroll Rec Center as well as various coffee stops. Frank is survived by his children: Dan (Teresa) Case of Grimes, Rod Case of Ft. Dodge, Mary Frances (Jeff) Malvern of Estes Park, CO, and Terry (Linette) Case of Humboldt; 8 grandchildren; 15 great-grandchildren; sisters-in-law and brothers-in-law Mona Case of Manning, Sandy (Ross) Gibilisco of Omaha, NE, Steve Zimmerman of Waukee, Mel Schwery of Arizona, as well as many nieces nephews, and other extended relatives. Frank was preceded in death by his parents, his wife Mary in 2018; grandson Tim Case in 2000; brothers: Richard (Margaret) Case, Gene Case, Tom (Marie) Case; and his sister-in-law Sharon Schwery.

The family of Francis Case created this Life Tributes page to make it easy to share your memories.

Send flowers to the Case family.