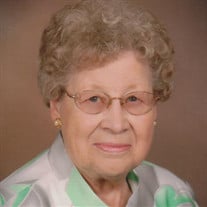 Florita Sibbel, 89 of Carroll, died Thursday, January 24, 2019 at Accura Healthcare of Carroll. Mass of the Christian Burial will be celebrated at 10:30 a.m., Tuesday, January 29, 2019 at St. John Paul II Parish- St. Lawrence Church in Carroll. The Celebrant will be Fr. Shinoj Jose. Mass Servers will be Anthony Sibbel and Ellie Sibbel. Music will be by Kate Cuddy and the St. Lawrence Choir. Lector will be Scott Sibbel. Gift Bearers will be Amy Berthelsen, Jill Moomey, Angela Braddock, and Rose Sibbel. Eucharistic Ministers will be Tom Sibbel, Glenn Sibbel and Adam Sibbel. Casket Bearers will be Gary Ferneding, Tim Ferneding, Paul Sibbel, John Sibbel, Joel Sibbel, Brian Sibbel, and Brett Sibbel. The Carroll Catholic Daughters of the Americas will form an honor guard for the funeral mass. Burial will be in Mt. Olivet Cemetery in Carroll. Friends may call at the Sharp Funeral Home in Carroll after 4 p.m. on Monday where there will be a rosary at 5 p.m. by the Carroll Catholic Daughters of the Americas and a Christian Wake Service at 6:30 p.m. The casket will be moved to St. Lawrence Church on Tuesday morning where additional visitation will be held from 9:30-10:15 a.m. Funeral arrangements are under the direction of the Sharp Funeral Home in Carroll and online condolences may be left for Florita’s family at www.sharpfuneral.com. Florita Mary, the daughter of Joseph and Mary (Bellinghausen) Riesberg was born on February 19, 1929 at Templeton, Iowa. She grew up near Templeton, attended country school, and later attended Sacred Heart School. After her formal education, Florita helped on the family farm, and worked as a mother’s helper for many families in the area. On February 8, 1949, Florita was united in marriage to Raymond Sibbel at Sacred Heart Catholic Church in Templeton. To this union five children were born. Florita and Raymond made their home south of Roselle where they were engaged in grain and livestock farming. In addition to farming, Florita was a devoted homemaker, caring for her five children and Raymond. She spent numerous hours tending her large garden, and canning the many fruits and vegetables it produced. Florita and Raymond retired to Carroll in 1998. Over the years, Florita volunteered in various capacities. She enjoyed visiting with, and spending time with her neighbors, sewing, and quilting. She made a quilt for every new grandchild, and another when they graduated from high school. Most of all, Florita cherished the time she spent with her children, and grandchildren, especially when they took the time to visit her. Florita was a former member of Holy Angels Parish in Roselle, former member of the Holy Angels Altar Society, current member of St. John Paul II Parish in Carroll, and member of the Carroll Catholic Daughters of the Americas. Florita is survived by her five children: Betty (Lonnie) Ferneding of Manning, Glenn (Pam) Sibbel of Ames, Judy (Gene) Braddock of Osceola, Tom (Therese) Sibbel of Willey, and Ron (Renee) Sibbel of Vail; 18 grandchildren, 26 great-grandchildren; her siblings: Marjorie (John) Sibbel of Halbur, and Leon (Marlene) Riesberg of Arizona; her sisters-in-law: Karen Riesberg of Griswold, Leona Riesberg of Halbur, Dorothy Riesberg of Carroll, and Leona Sibbel of Carroll; as well as many nieces, nephews, and other extended relatives. Florita was preceded in death by her husband Raymond in 2008; grandson Greg Sibbel in 2013; 2 great-grandchildren: Isaac Berthelsen, and Alexandra Moomey; her siblings: Catherine (George) Vogl, Dorothy (Raymond) Halbur, Leonard (Phyllis) Riesberg, Irvin Riesberg, Joseph P. Riesberg, LaVern (Stella) Riesberg, Bernice (Leo) Schroder, Earl Riesberg; her sister-in-law, Marian (Leonard) Golwitzer, and a brother-in-law, Melvin Sibbel.

The family of Florita Sibbel created this Life Tributes page to make it easy to share your memories.

Send flowers to the Sibbel family.