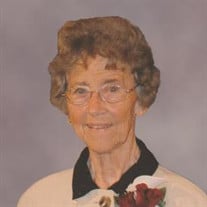 Florence Wernimont, age 88, of Roselle, died Thursday, April 19, 2018 at Regency Park Nursing Home in Carroll. Mass of the Christian Burial will be celebrated at 10:30 a.m., Friday, April 27, 2018 at Holy Angels Catholic Church in Roselle. The Celebrant will be Fr. Steven Brodersen. Mass Servers will be Grant and Logan Sibenaller. Music will be by Sue Feilmeier and the Holy Angels Choir. Lector will be Rose Behrens. Gift Bearers will be Richard Wernimont, and Diane Przepiorski. Eucharistic Minister will be Tom Simons. Honorary Casket Bearers will be Kimberly Flanagan, and Krystia Przepiorski. Casket Bearers will be Nicholas Wernimont, Michael Wernimont, Marc Flanagan, Garold Sorensen, Kurt Heidt, and Karl Kuker. Burial will be in Mt. Olivet Cemetery in Carroll. Friends may call at the Sharp Funeral Home in Carroll after 4 p.m. on Thursday where there will be a rosary at 5 p.m. followed by a Christian Wake Service at 6:30 p.m. Funeral arrangements are under the direction of the Sharp Funeral Home in Carroll and online condolences may be left for Florence's family at www.sharpfuneral.com. Born on September 24, 1929 at home on the family farm by Roselle, Iowa, Florence was the daughter of Edward and Mary (Venteicher) Renze. She attended Holy Angels School, and in 1948 she graduated from St. Angela’s Academy in Carroll. After her formal education Florence worked as a Deputy in the Carroll County Treasurer’s Office until 1953. On April 15, 1952, Florence was united in marriage to Victor Wernimont at Holy Angels Catholic Church in Roselle. After their marriage Florence stayed at home to raise the family. She particularly enjoyed gardening, and bird watching. She was a Charter Member of the National Home Gardening Club, and a lifelong member of Holy Angels Parish in Roselle. Florence was preceded in death by her husband, Victor in June of 2017, her son, Victor Jr. in 1956, her parents, Edward and Mary Renze, and her sister Alvina Renze in 1940. Left to celebrate Florence’s life are her children: Richard (Karen) Wernimont of Lidderdale, and Diane (Edward) Przepiorski of Auburn, CA; four grandchildren: Nicholas Wernimont, Michael Wernimont, Kimberly Flanagan, and Krystia Przepiorski; six great-grandchildren; and her sister, Marian Kuker of Texas.

The family of Florence Wernimont created this Life Tributes page to make it easy to share your memories.