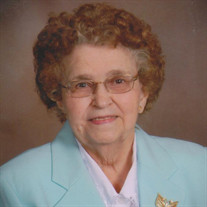 Florabell Brincks, 91 of Carroll, died Tuesday, December 20, 2016 at St. Anthony Regional Hospital in Carroll. Mass of the Christian Burial will be celebrated at 10 a.m. Saturday, December 24, 2016 at St. Mary’s Catholic Church in Willey. The Celebrant will be Fr. Timothy Johnson. Con-Celebrant will be Fr. Craig Collison. Music will be by Shell Schreck and the St. Mary’s Choir. Mass servers will be Anna Schultes and Nicole Bauer. Lectors for the funeral mass will be Renee Brincks and Nick Brincks. Gift Bearers will be: Jen Sease, Katelyn Brincks, Alison Brincks, and Kristy Willenborg. Casket Bearers will be: Randy Lohman, Dan Golwitzer, Dave Bauer, Don Halbur, Rich Halbur and Glenn Langel. Burial will be in the parish cemetery. Friends may call at the Sharp Funeral Home in Carroll after 5 p.m. on Friday where there will be a Christian Wake Service at 7 p.m. followed by a rosary. The casket will be moved to St. Mary’s Parish Hall on Saturday morning where visitation will resume at 9 a.m. and continue until time of the funeral mass. Funeral arrangements are under the direction of the Sharp Funeral Home in Carroll and online condolences may be left for Florabell’s family at www.sharpfuneral.com. Born on June 15, 1925 at Breda, Iowa, Florabell was the daughter of Herman and Bernadine (Schulte) Bruning. She spent her younger years in the Breda area where she attended country school. On April 27, 1954 she was united in marriage to Robert Brincks at St. Bernard’s Catholic Church in Breda. The couple resided near Breda for a brief time and then made their home on their farm in Willey. Florabell was a devoted homemaker and housewife while her husband Robert was engaged in grain and livestock farming. She loved tending to her garden, attending polka dances, baking, and playing cards with her grandchildren. In 1987, Florabell and Bob moved to the Carroll Community. She was a member of St. Lawrence Church in Carroll and a lifelong member of St. Mary’s Parish in Willey. Florabell is survived by her children: Lois (Dennis) Hoffman of Coon Rapids, Betty (Martin) Mohr of Westside, Gene (Joni) Brincks of Willey, Jerry (Renee) Brincks of Carroll and Mary (Mike) Rohner of Jefferson; 14 grandchildren; 13 great-grandchildren; two sisters: Inez Halbur of Breda, and Ivadell (Jerome) Langel of Templeton; as well as many nieces, nephews, and other extended relatives. Florabell was preceded in death by her parents; her husband Robert in 2000; her granddaughter, Amy Jo Brincks; her sisters: Violet Bruning and Ardis Bauer; her brother, Arlo Bruning; and her brothers-in-law, Norman Halbur and Norbert Bauer.

The family of Florabell Brincks created this Life Tributes page to make it easy to share your memories.