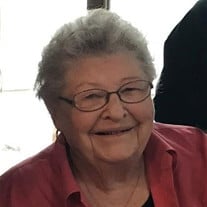 Evelyn “Evie” Wieland, age 83, of Carroll, died Thursday, June 1, 2017, at St. Anthony Regional Hospital in Carroll. Mass of the Christian Burial will be celebrated at 10:30 a.m. Monday, June 5, 2017, at Holy Spirit Catholic Church in Carroll. The Celebrant will be Fr. Timothy Johnson, assisted by Deacon Gary Schon. Music will be by Barb McDermott and the Holy Spirit Choir. Mass Servers will be Leah Klocke, Haley Wieland, and Shyley Smouse. Lectors will be Ron Smouse, Julie Klocke, and Kate Wieland. Gift Bearers will be Colin Klocke, Ethan Klocke, Weston Klocke, Blake Klocke, Mack Klocke, and James Ten Napel. Eucharistic Ministers will be Don Masching, and Joyce Masching. Casket Bearers will be Jake Smouse, Jess Smouse, Josh Smouse, Nathan Klocke, Jason Klocke, Ryan Klocke, and Ben Wieland. Burial will be at Mt. Olivet Cemetery in Carroll. Friends may call at the Sharp Funeral Home in Carroll after 3 p.m. on Sunday where there will be a Christian Wake Service held at 5 p.m. The casket will be moved to Holy Spirit Church on Monday morning; where visitation will resume at 9:30 a.m., and continue until the time of the funeral mass. Funeral arrangements are under the direction of the Sharp Funeral Home in Carroll, and online condolences may be left for Evie’s family at www.sharpfuneral.com. Born on December 28, 1933 at Carroll, Iowa, Evelyn was the daughter of Clarence and Catherine (Gehling) Masching. She grew up near Carroll, and graduated from St. Angela’s Academy in 1951. After high school Evie began working at Jung’s Bakery. On April 21, 1952, Evelyn was united in marriage to Donald Wieland at Sts. Peter and Paul Catholic Church in Carroll. In the fall of that year Don was drafted into the United States Army, upon his return the couple made their home in Carroll for a brief time, before settling on their family farm north of Carroll. During those years Evie was a devoted homemaker, and was also active in the grain and livestock farming operation. In her later years Evie worked at Denny’s Restaurant, she managed the Carroll Knights of Columbus Hall for several years, and most recently worked as a caregiver for Caring Hands. Evelyn enjoyed cheering on her beloved Chicago Cubs. She also enjoyed cooking, canning, spending time with her “Lunch Club”, and restoring antique furniture. Most of all Evie enjoyed the time she spent with her family. She was a member of Holy Spirit Parish, and a former member of Our Lady of Mt. Carmel Parish in Mt. Carmel. Left to celebrate Evie’s life is her husband of 65 years: Donald Wieland of Carroll; children: Steve (Mary Lou) Wieland of Westside, Tom “Tank” Wieland, and his friend Joni Bock of Carroll, Pam (Ron) Smouse of Springfield, MO, and Patrick (Kate) Wieland of Denver, CO; a son-in-law: Dennis Klocke of Templeton; 13 grandchildren, and 13 great-grandchildren. Also surviving are her siblings: Edna Ludwig of Carroll, Lois (Chuck) Neumayer of Carroll, Don (Barb) Masching of Breda, and Jim (Joyce) Masching of Carroll; her brothers-in-law: Leo Schon of Carroll, Jim (Mary Ann) Pudenz of Carroll, and Paul Wieland of Carroll; her sisters-in-law: Betty Masching of Carroll, and Beatrice (Richard) Pudenz of Carroll; as well as many nieces, nephews, and other extended family members. Evelyn was preceded in death by her parents; a daughter: Linda Klocke; a son in infancy: Michael, a son-in-law: David Imming; a close friend: Joyce Hindman; her siblings: Rosemary Schon, Mary Pudenz, Lorraine “Rainy” Wieland, Louis (Eunice) Masching, Edwin (Norma) Masching; and two siblings in infancy: Leona Masching, and Robert Masching; her brother-in-law: Orville Ludwig; her sisters-in-law: Maxine (Leon) Schultes, Sister Marian Wieland, F.S.P.A., and Dolores (LaVern) Pudenz.

The family of Evelyn "Evie" Wieland created this Life Tributes page to make it easy to share your memories.