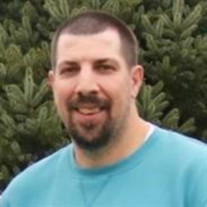 Eugene Weber, age 45, of Breda, died Saturday, June 26, 2021 at St. Anthony Regional Hospital in Carroll. Mass of the Christian Burial will be celebrated at 10:30 a.m. Thursday, July 1, 2021 at St. Bernard Catholic Church in Breda. The Celebrant will be Fr. Timothy Friedrichsen. Music will be by Marilyn Hundling and the St. Bernard’s Choir. Lector will be Pat Koster. Gift Bearers will be Cindy Bell and Cheryl Kock. Eucharistic Minister will be Jean Grote. Honorary Casket Bearers and Casket Bearers will be Reggie Kock, Elliott Kock, Cooper Kock, Jason Kock, Rodger Bell, Keith Weber, Bryan Weber, Eric Weber, Mike Weber, Tony Weber, Kevin Wiederin, Steve Wiederin, Ryan Weber, Corey Weber, and Louis Weber, Jr. Burial will be in the parish cemetery. Visitation will be held from 5-7 p.m. on Wednesday at the Sharp Funeral Home in Breda. A rosary will be prayed at 7 p.m. Funeral arrangements are under the guidance of the Sharp Funeral Home in Carroll, and online condolences may be left for Eugene’s family at www.sharpfuneral.com. Eugene was born on July 3, 1975, shortly after his birth he was adopted by Ronald and Connie (Kock) Weber. He grew up in Breda and graduated from Carroll High School in 1994. After high school Eugene attended Western Iowa Technical College before beginning a career as an electrician. Eugene worked as an electrician until a work injury required him to move into a new career. Eugene began working at the Graphic Edge, a job he held until his passing. Eugene enjoyed watching and playing sports, model electric train railroading, having multiple railroads set up in his basement, and taking walks on the Sauk Rail Trail and around Breda. Eugene had a deep faith; he was an active member of St. Bernard’s Parish, and served as an usher frequently. Eugene is survived by his mother, Connie Weber of Breda; sister, Rhonda (Chuck) Martin of El Cajon, CA; as well as many aunts, uncles, cousins and friends. Eugene was preceded in death by his father Ronald; paternal and maternal grandparents; three uncles: Eugene Kock, Vern Weber, and Elmer Wiederin, an aunt Judy Weber, and cousins Bobby Bell, Nathan Vonnahme, and Cindi Loring.

The family of Eugene Weber created this Life Tributes page to make it easy to share your memories.

Send flowers to the Weber family.