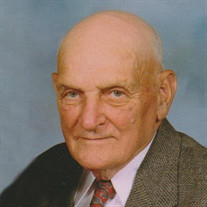 Eugene Heithoff, age 96, of Templeton, died Wednesday, May 17, 2017, at Swan Place Assisted Living in Carroll. Mass of the Christian Burial will be celebrated at 10:30 a.m. Tuesday, May 23, 2017 at Sacred Heart Catholic Church in Templeton. The Celebrant will be Fr. Steve Brodersen, with Eugene’s nephew Fr. Merlin Schrad as Con-Celebrant. Music will be by Jeanne Kerkhoff and the Sacred Heart Men’s Choir. Lectors will be Michael Linn and Ben Wittrock. Gift Bearers will be Allison Heithoff, Traci Jones, Sarah Linn, Abby Heithoff, Andrea Schroeder, Jenny Dooley, and Anthony Heithoff. Eucharistic Minister will be Jennifer Heithoff. Casket Bearers will be Clint Heithoff, Nick Ludwig, Matthew Wittrock, Scott Ludwig, Ben Wittrock, Joshua Heithoff, Andrew Heithoff, and Johnathan Linn. Burial will be in the parish cemetery with military honors conducted by the Dedham American Legion. Friends may call at the Sharp Funeral Home in Carroll after 5 p.m. on Monday, where there will be a Christian Wake Service held at 6:30 p.m. The casket will be moved to Sacred Heart Church in Templeton on Tuesday morning where visitation will resume at 9:30 a.m. and continue until the time of the funeral mass. Funeral arrangements are under the direction of the Sharp Funeral Home in Carroll, and online condolences may be left for Eugene’s family at www.sharpfuneral.com. Eugene was born on April 12, 1921 to Joseph and Martha (Roth) Heithoff on a farm East of Templeton, Iowa. He grew up near Templeton, and he attended Sacred Heart School. Eugene began working with his dad on the family farm before proudly serving his country for three years in the European Theater of World War II, earning the rank of Sergeant. He returned home in December of 1945. On May 20, 1946 Eugene was united in marriage to Margaret Schaeuble at Sacred Heart Church in Templeton, by Monsignor Huesman. After their marriage Eugene continued to farm, raised Chinchillas, and he also worked at Garst in Templeton for fifteen years. Eugene retired from farming when he turned 75 years old, after many years of grain farming, and 35 years of raising feeder pigs. Eugene enjoyed playing baseball until he was 53 years old. Over the years he also coached parochial league in Templeton, and was instrumental in the building of the Templeton Softball Diamond. He was admitted to the Carroll County 16 inch softball Hall of Fame in 1988. In addition to baseball, Eugene liked fishing, and playing cards. He could always figure out math problems with the correct answers without using paper, pencil or calculator; he couldn’t explain how he did it, it just happened! Eugene was on the Templeton City Council for ten years. He was a member of Sacred Heart Church in Templeton, and a lifetime member of the Knights of Columbus, Dedham American Legion, and VFW Manning. Eugene is survived by his wife Margaret, and their children: Pat (Michael) Linn of Fort Worth, TX, Bill (Deb) Heithoff of Carroll, Mark Heithoff of Grimes, John (Jenny) Heithoff of Omaha, NE, Gloria (Paul) Ludwig of Carroll, and Paula (Alan) Wittrock of Breda; 16 grandchildren, 8 great-grandsons; his sisters: Edna Schrad of Templeton, Ruth Brown of Des Moines, and Bernice (Edwin) Halbur of Coon Rapids; his sisters-in-law, and brothers-in-law: Marge Heithoff of Madrid, Mildred Heithoff of Templeton, Delores Schaeuble of Sioux City, Mary Kisgen of Wildomer, CA, Norma Jean Schaeuble of Des Moines, Anna Mae (Merlin) Irlmeier of Templeton, Judy Balk of Templeton, and Ernest When of Arizona; as well as many nieces, nephews, and other extended relatives. Eugene was preceded in death by his parents: Joseph and Martha Heithoff; and his parents-in-law: Joseph and Clara Schaeuble; his son Randy Heithoff; his son-in-law, Keith Meiners; a grandson Ryan Heithoff; his brothers: Linus Heithoff, Marvin (Esther) Heithoff, Virgil Heithoff, and Joseph Heithoff, JR.; sisters: Bonita (John) Sporrer and Irene (Michael) Richter, Rita (Joseph) Simons; brothers-in-law and sisters-in-law: John Schaeuble, Madge (Don) Scott, William Lamden, Raymond Schaeuble, Joseph (Beverly) Schaeuble, Edward Schaeuble, Leroy Balk, Marcia When, Marcella Schrad, and Leroy Brown.

Eugene Heithoff, age 96, of Templeton, died Wednesday, May 17, 2017, at Swan Place Assisted Living in Carroll. Mass of the Christian Burial will be celebrated at 10:30 a.m. Tuesday, May 23, 2017 at Sacred Heart Catholic Church in Templeton.... View Obituary & Service Information

The family of Eugene Heithoff created this Life Tributes page to make it easy to share your memories.

Send flowers to the Heithoff family.