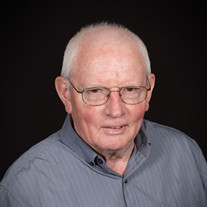 Elmer Wiederin, age 77, of Carroll, died late Friday evening, August 25, 2017 at St. Anthony Nursing Home in Carroll. Mass of the Christian Burial will be celebrated at 10:30 a.m. on Wednesday, August 30, 2017 at St. Lawrence Catholic Church in Carroll. The celebrant will be Fr. Brian Feller. Music will be by Kate Cuddy, with Sherry Loughran as cantor. Lector will be Stephanie Wiederin. Gift Bearers will be Ben Pudenz, Lilly Pudenz, and Ellie Wiederin. Eucharistic Ministers will be Vern Weber, and Steve and Rose Vonnahme. Casket Bearers will be Stephanie Wiederin, Chelsea Wiederin, Colby Wiederin, MacKenzie Heuton, MacKayla Heuton, MacKade Heuton, and Shelby Wiederin. Burial will be at Mt. Olivet Cemetery in Carroll, with military honors conducted by the Carroll American Legion. Friends may call at the Sharp Funeral Home in Carroll after 5 p.m. on Tuesday where there will be a Carroll Knights of Columbus Rosary prayed at 7 p.m. The casket will be moved to St. Lawrence Church on Wednesday morning where visitation will resume at 9:30 a.m., and continue until the time of the funeral mass. Funeral arrangements are under the direction of the Sharp Funeral Home in Carroll, and online condolences may be left for Elmer’s family at www.sharpfuneral.com. Born on February 5, 1940 in Carroll County, Iowa, Elmer was the son of Ted and Rose (Sturm) Wiederin. He grew up near Ralston, and in 1957 he graduated from Glidden-Ralston High School. After high school Elmer worked for the Glidden Cooperative. On May 7, 1964 Elmer was inducted into the United States Army. He was stationed in Greenland, where Elmer proudly served his country. On April 30, 1969 Elmer was honorably discharged, and he returned to Carroll County. On June 7, 1969 Elmer was united in marriage to Joleen Weber at St. Lawrence Catholic Church in Carroll. The couple made their home in Carroll where Elmer worked for Juergens Produce for over 35 years. Elmer enjoyed fishing and playing cribbage. Most of all Elmer enjoyed spending time with his family, especially his grandchildren, and the many drives around Swan Lake Park they shared together. Elmer was a member of the Carroll Knights of Columbus, Carroll American Legion, where he proudly served on the honor guard, and St. Lawrence Parish in Carroll. Left to celebrate Elmer’s life is his wife Joleen Wiederin of Carroll; a son Steve (Kris) Wiederin of Carroll, and their children: Stephanie, Chelsea, and Colby; a daughter Renee (Dave) Heuton of Belle Plaine, MN, and their children: MacKenzie, MacKayla, and MacKade; a son Kevin (Tarra) Wiederin of Omaha, NE, and their son: Stone, with one more on the way; a daughter Leslie (Matt) Pudenz of Grimes, and their children: Ben, Lilly, Max, and Madi; and a daughter Michelle (Brad) Riesberg of Ankeny, and their children: Shelby and Ellie. Also surviving are Elmer’s siblings: Alice (Bruce) Riedesel of Lanesboro, Irene (Dan) Wurzer of Farmington, MN, and James (Kathy) Wiederin of Omaha, NE; his sisters-in-law and brothers-in-law: Betty Wiederin of Glidden, Karen Wiederin of Cedar Rapids, Lou (Ellen) Weber of Maryland, Ed (Peggy) Weber of Missouri, Vern (Jean) Weber of Carroll, Jim (Linda) Weber of Carroll, Leo (Sandy) Weber of California, Rose (Steve) Vonnahme of Altoona, and Connie Weber of Breda; as well as many nieces, nephews, and other extended relatives. Elmer was preceded in death by his parents; parents-in-law: Ben and Margie Weber; a granddaughter: Grace Ann Pudenz; his brothers: Bob Wiederin, and Merle Wiederin; his brother-in-law: Ron Weber, and his sister-in-law: Judy Weber.

The family of Elmer D. Wiederin created this Life Tributes page to make it easy to share your memories.

Send flowers to the Wiederin family.