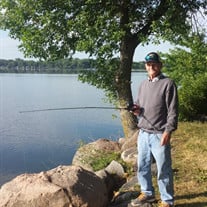 Elmer Irlbeck, 69 of Westside, died Saturday, April 14, 2018 at the University of Nebraska Medical Center in Omaha, Nebraska following a yearlong battle with leukemia. Mass of the Christian Burial will be celebrated at 10:30 a.m., Thursday, April 19, 2018 at St. John’s Catholic Church in Arcadia. The Celebrant will be Fr. Richard Remmes. Music will be by Sharon Bierl and the St. John’s Choir. Lector for the funeral mass will be Diana Hoogestraat. Gift Bearers will be Elmer’s grandchildren: Bailee, Britnee, Jake, Bethanee, and John Irlbeck, Tempi Hathcock, and Drake and Josephine Moore. Eucharistic Ministers will be Diana Hoogestraat and Jerome Henkenius. Casket Bearers will be: Dan Irlbeck, Bob Irlbeck, Kevin Irlbeck, Jim Irlbeck, Doug Irlbeck, Daryl Irlbeck, David Irlbeck, Brian Berg, Kevin Berg, and Allen Steinkamp. The Arcadia American Legion will form an honor guard for the funeral mass. Burial will be at a later date. Friends may call at the Sharp Funeral Home in Carroll after 4 p.m. on Wednesday where there will be a Christian Wake Service at 7 p.m. Additional visitation will be from 9-10 a.m. on Thursday at the funeral home. In lieu of flowers memorials may be left at the funeral home or the church for the Powell Center at Iowa Methodist Hospital or for Kuemper Catholic Schools Foundation. Funeral arrangements are under the direction of the Sharp Funeral Home in Carroll and online condolences may be left for Elmer’s family at www.sharpfuneral.com. Elmer Albert Irlbeck was born on June 27, 1948 in Carroll, Iowa the son of Albert and Elizabeth (Hoffman) Irlbeck. He attended St. John’s School and later graduated from Kuemper Catholic High School in 1966. Following his schooling he was drafted in the United States Army and served during the Vietnam War and was honorable discharged in October of 1969. Elmer returned to the Arcadia area and was united in marriage to Linda Hoogestraat on November 27, 1971 at St. John’s Catholic Church in Arcadia. Elmer farmed south of Arcadia his entire lifetime and also held various jobs including Farmland Foods in Carroll and most recently Haley Equipment in Carroll. He thoroughly enjoyed spending time with his grandchildren and following them in their various activities. Elmer also enjoyed trips to the casino and spending time outdoors. He was proud to be one of the original members of the Arcadia Budman Softball Team. Elmer was a member of the Arcadia American Legion. Elmer is survived by his wife Linda Irlbeck of Westside; his children: Jen (Brian) Hathcock and their daughter, Tempi of Carroll, Stephanie (Trevor) Moore and their children, Drake and Josephine of Osceola, Jesse (Jodi) Irlbeck and their children, Bailee, Britnee, Jake, Bethanee, and John of Arcadia, and Michael (Melissa) Irlbeck and Baby Irlbeck of West Des Moines; his siblings: Marie (Gerald) Berg of Arcadia, Larry (Joyce) Irlbeck of Westside, and Allen (Sue) Irlbeck of Avoca; his brothers-in-law and sisters-in-law: Laverne Steinkamp of Adams, MN, Tom (Diana) Hoogestraat of Glenwood, Steve (Joann) Hoogestraat of Carroll, Kay Campbell (Todd Julin) of Arcadia, and Jill (Cory) Johnston of Carroll; his step-mother-in-law, Iola Hoogestraat of Carroll; as well as other extended relatives and many friends. Elmer was preceded in death by his parents; and his siblings: Eddie Irlbeck and Alice Steinkamp of Minnesota and Lavon Irlbeck of Colorado.

Elmer Irlbeck, 69 of Westside, died Saturday, April 14, 2018 at the University of Nebraska Medical Center in Omaha, Nebraska following a yearlong battle with leukemia. Mass of the Christian Burial will be celebrated at 10:30 a.m., Thursday,... View Obituary & Service Information

The family of Elmer Irlbeck created this Life Tributes page to make it easy to share your memories.