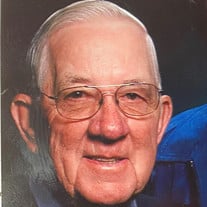 Elmer Grote, 87 of Breda, died early Monday morning, June 8, 2020 at Twilight Acres Nursing Home in Wall Lake. Private Family Funeral Services will be held at the Sharp Funeral Home in Carroll on Thursday, June 11, 2020 at 11 a.m. Officiating will be Fr. Timothy Pick. Casket Bearers will be: Melissa Toney, Darrin Toney, Chance Wiese, Nathan Kult, John Grote and Ron Grote. The public is invited to attend the graveside service at 11:45 a.m. on Thursday at St. Bernard’s Cemetery in Breda and are asked to abide by COVID 19 social distancing guidelines. Military Honors will be conducted by the Breda American Legion. A Live Stream Broadcast and recording of Elmer’s service can be found by visiting the Sharp Funeral Home Carroll, Iowa YouTube Channel at this link: https://www.youtube.com/channel/UCqd2eeRJk5RTdEJoEooUoAQ. An Icon on that page will be available by 10:55 a.m. on Thursday. Those wishing to mail their memorial may direct it to Elmer Grote Family c/o Sharp Funeral Home, 226 W. 8th Street, Carroll, IA 51401. Funeral arrangements are under the guidance of the Sharp Funeral Home in Carroll, and online condolences may be left for Elmer’s family at www.sharpfuneral.com. Born on January 22, 1933 in Arcadia, Iowa, Elmer was the son of Herman and Louisa (Janning) Grote. Elmer attended St. Bernard’s School in Breda and later assisted his family with their farm operation. He served in the United States Army from 1956-1958 until his honorable discharge. On April 11, 1959, Elmer was united in marriage to Lois Neppl at Sts. Peter and Paul Catholic Church in Carroll. Elmer and Lois made their home southwest of Breda where he was engaged in grain and livestock farming. As their health began to decline, they both became residents at Twilight Acres Nursing Home in Wall Lake. Over the years Elmer was active with St. Bernard’s Church, Breda American Legion, Catholic Order of Foresters and served on various other boards in several capacities. His main devotion was his family, his faith, and farming. Elmer is survived by his children: Deb (Keith) Kult of Coon Rapids, Dave (Toni) Grote of Arcadia, Russell Grote of Arcadia, and Janet (Tom) Grote-Knight of Bettendorf; his grandchildren: Kylie Grote, Melissa Toney, Kelsey Wiese, Nathan Kult, and Jessie Grote; his great-grandchildren: Adie and Wyatt Toney; his siblings: Vernon Grote of Carroll, Leonard (Jean) Grote of Breda, and Joe (Donna) Grote of Carroll; his sisters-in-law: Charla Grote of Farnhamville, Mary Jane Collison of Carroll and Rosie Neppl of Illinois; as well as other extended relatives. Elmer was preceded in death by his wife Lois in February of 2020; his parents; his son Jeff Grote; his son John Grote in infancy; his brothers, Erwin and Louis Grote; and his sister-in-law, Winona Grote.

The family of Elmer Grote created this Life Tributes page to make it easy to share your memories.