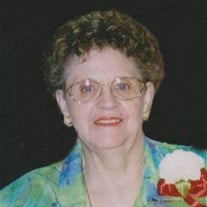 Elaine V. Dentlinger, age 89, of Carroll, and formerly of Lidderdale, died Monday, October 30, 2017, at Regency Park Nursing Home in Carroll. Mass of the Christian Burial will be celebrated at 10:30 a.m. Friday, November 3, 2017, at Holy Family Catholic Church in Lidderdale. The celebrant will be Fr. Brian Feller. Mass Servers will be Mitchell and Parker Badding. Music will be by Deanna Daniel, and the Holy Family Parish Choir. Lector will be Nicole Dentlinger. Gift Bearers will be Kelsey Dentlinger, Joe Karstens, Logan Karstens, and Crystal Koehler. Eucharistic Ministers will be Joe and Katie Daniel, and Joni Badding. Casket Bearers will be Nicole Dentlinger, Kelsey Dentlinger, Dave Dentlinger, Ryan Dentlinger, Dale Dentlinger, Craig Dentlinger, Bill Schreck, and Dan Badding. Burial will be in the parish cemetery. Friends may call at the Sharp Funeral Home in Carroll after 5 p.m. on Thursday, where there will be a Christian Wake Service held at 7 p.m. Additional visitation will be held from 9 until 10 a.m. on Friday at the Sharp Funeral Home in Carroll. Funeral arrangements are under the direction of the Sharp Funeral Home in Carroll, and online condolences may be left for Elaine’s family at www.sharpfuneral.com. Elaine was born on July 20, 1928 in Roselle, Illinois; the daughter of Fred and Matilda (Frass) Hitzemann. After growing up there, and attending school, Elaine took a job with Butler Brothers, an office company in Chicago. Elaine would commute by riding the train that would take her into downtown Chicago, and return back to Roselle in the evening. Elaine met her husband Elmer Dentlinger at a wedding of a mutual friend, while Elmer was on leave from the military. On September 19, 1953, the couple was united in marriage at St. Walters Catholic Church in Roselle, Illinois. The couple made their home on the Dentlinger family farm south of Arcadia, Iowa, and to this union five children were born. Elaine enjoyed gardening, crocheting, knitting, playing cards, and traveling. Some of her travels took her to Hawaii, Europe, Florida, and Alaska just to name a few. She also enjoyed volunteering with local organizations, and most of all Elaine enjoyed the time she spent with her family. Elaine was a member of Holy Family Parish of Lidderdale, and the Holy Family Woman’s Guild. Left to celebrate Elaine’s life are her children: Duane (Wanita) Dentlinger of Carroll, and Roy Dentlinger of Glendale, AZ; her grandchildren: Nicole Dentlinger of Ankeny, Kelsey Dentlinger (fiancé Joe Karstens) of Glidden, Dave (Dora) Dentlinger of Carroll, and Ryan Dentlinger (fiancé Crystal Koehler) of Sioux Falls, SD; 2 great-grandchildren: Logan Karstens, and Daniel Dentlinger; her brothers: Roland (Pat) Hitzemann of Illinois, and Ray (Sharon) Hitzemann of Illinois; and her sisters-in-law: Helen Hitzemann of Florida, Arlene Dentlinger of Carroll, Isabelle Dentlinger of Denison, and Joni Badding of Carroll; as well as many nieces, nephews, and other extended relatives. Elaine was preceded in death by her husband Elmer in 1985; her children: Chris Dentlinger, Pam (Jack) Small, and Thomas Dentlinger; her parents: Fred and Matilda Hitzemann, her parents-in-law: Joseph and Anna Dentlinger; her siblings: Wilbert (Bernice) Hitzemann, Albert (Marge) Hitzemann, Venetta (Eddie) Einoris, Leona (John) Bohne, Nelda (Bob) Mish, Maureen (Elmer) Soehlman, Leonard Hitzemann, Elmer Hitzemann in infancy, and Melvin Hitzemann at age 14; her brothers-in-law, and sisters-in-law: Aloysius (Al) Dentlinger, Lawrence Dentlinger, Martha (Everett) Daniel, Clara (Elmer) Friedman, Ruth (Andy) Schreck, Mary Dentlinger in infancy, and Bob Badding.

The family of Elaine V. Dentlinger created this Life Tributes page to make it easy to share your memories.

Elaine V. Dentlinger, age 89, of Carroll, and formerly of Lidderdale,...

Send flowers to the Dentlinger family.