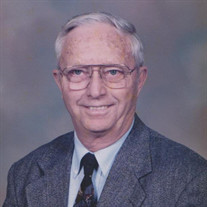 Edward John “Ed” Tigges, age 94 of Carroll, died on Thursday March 4, 2021 at Sunnybrook of Carroll. Mass of Christian Burial will be celebrated at 10:30 a.m. Monday, March 8, 2021 at St. Mary’s Catholic Church in Willey. The Celebrant will be Fr. Patrick Behm. Concelebrant will be Fr. Timothy Johnson. Music will be provided by Jane Heithoff and Grant Meiners. Lectors will be Jennifer Dougall and Shelley Klocke. Casket Bearers will be Scott Tigges, Paul Tigges, Adam Tigges, Ryan Tigges, Brett Tigges, Ben Dailey, Jon Daiker, Andy Tigges, Chris Tigges, and Mike Tigges. Honorary Casket Bearers will be Ed’s Granddaughters and great grandchildren. Burial will follow at St. Mary’s Catholic Cemetery with military honors provided by the Dedham American Legion and the honor guard provided by Ed’s great grandsons (SAL). Visitation will be held from 3 to 5 p.m. on Sunday at the Sharp Funeral Home in Carroll. There will be no visitation prior to the funeral mass on Monday morning. Those in attendance of Ed’s services are required to wear a face covering and abide by social distancing guidelines. Arrangements are under the guidance of Sharp Funeral Home in Carroll and online condolences may be left for Ed’s family at www.sharpfuneral.com. Ed was born on December 31, 1926 in Dedham, Iowa, the son of Joseph and Anna (Brauckman) Tigges. He graduated from St. Joseph’s School in Dedham. Ed joined the United States Army serving during the tail end of World War II. He notably traveled to Italy during his service in the Army. On November 7, 1950, Ed married Rita Grossman at St. Mary’s Church in Willey. Ed and Rita were long-time members of St. Mary’s. They were blessed with four children: Gary, Allan, Mary, and Kevin. Ed farmed south of Dedham until he retired from farming in 1970. Following his farming days, Ed began to work at Garst and Thomas Seed Corn Co. in Coon Rapids. During this time, Ed and Rita moved to the house in Willey where Rita's father once lived. Rita died in 1992 after a six-year battle with cancer. Ed was an outdoor man. He loved spending time with nature and wildlife. Ed was also a very patriotic person. He served his country faithfully, and was a member of the Dedham American Legion for over 60 years. Ed loved to spend time with his family the most, especially his grandchildren. Ed is survived by his children Gary (Lola) Tigges of Coon Rapids; Allan (Pat) Tigges of Willey; Mary Daiker (special friend Ralph Hansohn) of Carroll; and Kevin (Barb) Tigges of Mt. Caramel; 19 grandchildren; 41 great grandchildren; 1 brother Donald (Marlene) Tigges of Carroll; sisters-in-law Lorena Grossman, Imelda Kerkhoff, and Delores (Jim) Greenwood; brother-in-law Wayne Heithoff; and many nieces, nephews, cousins, and friends. He was preceded in death by his parents; parents-in-law Bernard and Mary Grossman; wife Rita in 1992; grandson Jason Tigges; and siblings Alma Klocke, Martina Van Dyke, Leonard, Arthur, Aldred, and Joseph Tigges; and a sister in infancy, Lucy.

The family of Edward John "Ed" Tigges created this Life Tributes page to make it easy to share your memories.