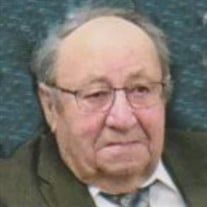 Edward Reiling, 93 of Carroll, died Thursday, June 9, 2022, at St. Anthony Regional Hospital in Carroll. Mass of the Christian Burial will be celebrated at 1:30 p.m. Tuesday, June 14, 2022, at Holy Spirit Church – St. John Paul II Parish in Carroll. The Celebrant will be Fr. Kevin Richter. Music will be by Kathy Halbur and Sherry Loughran. Mass Server will be Colten Mohr. Lector for the Funeral Mass will be Alan Reicks. Gift Bearers will be Ashley Reiling, Kayce Dein, Emily Fischer, Natalie Reicks, Deborah Kessling, and Kristen Mueggenberg. Eucharistic Minister will be Diane Reiling. Casket Bearers will be Denny Cannon, Shawn Cannon, Adam Reiling, Andrew Reiling, Logan Mohr, Eric Fischer, and Ethan Fischer. Burial will be at 4 p.m. on Tuesday in St. Mary’s Cemetery near Auburn. Visitation will be held at Holy Spirit Church on Tuesday from 12-1:15 p.m. Funeral arrangements are under the guidance of the Sharp Funeral Home in Carroll and online condolences may be left for Ed’s family at www.sharpfuneral.com. Born to John and Josephine (Schelle) Reiling on February 15, 1929, in Algona, IA. On October 5th, 1948, Dad married our mom, Ilene Kent at St. Mary’s church in Auburn Iowa. From this union are 6 children. Phyllis, David, Kay, Denny, Carol, & Michelle. 15 Grandchildren, 10 great-grandchildren. Dad’s greatest love was farming, playing drums, golfing, and taking care of golf greens after retiring from farming. Father’s Day was his special time to go golfing with his boys, son-in-law’s and grandson’s. Sometimes us girls got a chance to golf with Dad and he would give us a few lessons. He was known for being straight out on the fairway. “Steady Eddie” was his nickname among the other golfers. On July 2nd, 1983, Ilene (Mom) passed away. Dad met 5 years later Marguerite (Marge) Stork who had 6 children. On August 6, 1988, Ed and Marge were united in marriage. We became a family of 12. They enjoyed 33 years of companionship and family fun and laughter. There were times of joy and times of sadness, but we helped each other through those times with love and support. We are a family that doubled in size and quad tripled with grandchildren and great grandchildren. They were the light of Dad and Marge’s life. For 93 years our dad was a loving father with a big heart who loved to have conversations with everyone he met, play cards, sing in the choir, greeter at the churches he attended, and big fan of the Cubs. When the Cubs were playing the Yankee’s dad and Marge had their gloves on. He loved to watch Lawrence Welk, Molly B, and Westerns. Dad touched many lives and will be remembered. We will miss our Dad but know he is forever in our hearts, and we have memories that will keep us laughing and remembering our Dad who showed us Faith is our strength. Thank You Dad!! Ed is survived by his children: Phyllis (Dennis) Cannon, David (Mary Ann) Reiling, Kay Getzfred, Denny (Diane) Reiling, Carol (Virgil) Mohr, Michelle (Alan) Reicks. Our additional family: Gary (Kate) Stork, Doug (Kerry) Stork, & Dean (Cheryl) Stork, son-in-law Bill (Karen) Rohde, Elaine Corsbie, 13 grandchildren, 25 great-grandchildren, & 4, great-great grandchildren. Ed was preceded in death by his parents and brothers Cyril & Richard Reiling , his first wife Ilene, his wife Marguerite, Granddaughter Erin Cannon; Marguerite’s family including sons: Dan, Ron, Gene, Neil, John Stork and Dale Stork; daughters Marilyn Rohde & Jan Otto, daughter-in-law Jolene Stork, son-in-law Gary Otto, grandchildren Joseph Otto, Christopher & Jennifer Rohde, Melissa Stork.

The family of Edward Reiling created this Life Tributes page to make it easy to share your memories.

Send flowers to the Reiling family.