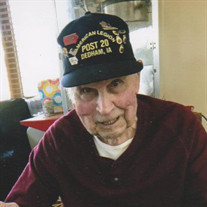 Edward Pletchette, age 89, of Willey, died Tuesday, September 14, 2021 at Regency Park Nursing Home in Carroll. Mass of the Christian Burial will be celebrated at 10:30 a.m. Tuesday, September 21, 2021 at St. Mary’s Catholic Church in Willey. The Celebrant will be Fr. Kevin Richter. Music will by Kathy Halbur and Kathleen Macke. Casket Bearers will be members of the Dedham American Legion. Burial will be at the parish cemetery with military honors conducted by the Dedham American Legion. Visitation will be held in the St. Mary’s Parish Hall from 9:30 to 10:15 a.m. Tuesday morning. Funeral arrangements are under the guidance of the Sharp Funeral Home in Carroll, and online condolences may be left for Ed’s family at www.sharpfuneral.com. Edward, the son of Bernard Sr. and Anna (Neppel) Pletchette was born on December 8, 1931 at Willey, Iowa. He grew up in Willey and attended St. Mary’s School. Upon completion of his formal education, Ed was inducted into the United States Army and honorably served his country from 1953-1955. Upon his honorable discharged he returned to the area. Ed was a lifelong resident of Willey where he was very active in town and with St. Mary’s Church. Ed was a member of the Dedham American Legion Dewitt Loustaunau Post 20. He enjoyed spending time with his family, his community of Willey, and serving with the Dedham American Legion. Ed is survived by nieces: Rhonda Ford of Rockwell City, and Sue (Dan) Cornelius of Lake City; great nieces and great nephews: Nolan Ford of Iowa City, Alex Cornelius of Lake City, Brandon Cornelius of Ames, Jessica Cornelius of Lake City, and Zoe Cornelius of Lake City as well as his extended family members and friends. Ed was preceded in death by his parents: Bernard Sr, and Anna Pletchette; his siblings: Eugene Pletchette, Ronald Pletchette, Bernard Pletchette, Jr., Leon Pletchette, Freda Pletchette, and Anita Dorski; as well as a great-niece: MacKenzie Ford.

The family of Edward Pletchette created this Life Tributes page to make it easy to share your memories.