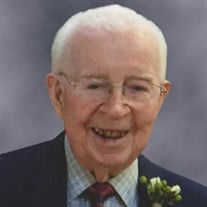 Edward J. Murphy, 91 of Carroll, died Thursday, October 26, 2017 at Hawkeye Care Center in Carroll, Iowa. Mass of the Christian Burial will be celebrated at 10 a.m. Monday, October 30, 2017 at St. Lawrence Catholic Church in Carroll. The Celebrant will be Fr. Timothy Schott. Music will be by Kate Cuddy and the St. Lawrence Choir. Lector for the funeral mass will be Phil Storto. Gift Bearers will be Ed’s great-grandchildren. Casket Bearers will be Ed’s grandsons’: Sean Murphy, Jeff Wittrock, Matt Wittrock, Tom Wittrock, Luke Wittrock, Jake Wittrock, and Phil Storto. Burial will be in the Carroll City Cemetery with military honors conducted by the Carroll American Legion. Friends may call at the Sharp Funeral Home in Carroll after 3:30 p.m. on Sunday where there will be a Carroll Knights of Columbus Rosary at 4 p.m. and a Christian Wake Service at 5 p.m. The casket will be moved to St. Lawrence Church on Monday morning where visitation will resume at 9 a.m. and will continue until time of the funeral mass. Memorials may be left at the funeral home or the church for Kuemper Catholic Schools Foundation or St. Anthony Hospice. Funeral arrangements are under the direction of the Sharp Funeral Home in Carroll and online condolences may be left for Ed’s family at www.sharpfuneral.com. A son of Edward F. and Matilda (Weiher) Murphy, he was born on September 1, 1926 in Melrose Park, Illinois. Ed was raised in Maywood, Illinois, a western suburb of Chicago. He graduated from Proviso High School in 1944. The same year Ed entered the United States Navy where he served until he was honorably discharged in 1946. On June 18, 1947, Ed was married to Donna Hannasch at St. John’s Catholic Church in Arcadia, Iowa. He worked for Hannasch Motors for nine years before being appointed County Auditor in 1956. In 1964, Ed was appointed Clinic Manager at the Carroll Medical Center where he worked until his retirement in 1991. Ed was a member of the Carroll American Legion where he served as Commander in 1955. He was also a member of Carroll Knights of Columbus, Carroll Country Club, and St. Lawrence Church in Carroll. Ed was active in the Carroll Chamber of Commerce, serving as President in 1972. He was also a past President of the Kuemper Parents Club and past President of St. Lawrence School Board. Ed is survived by his wife of 70 years, Donna Murphy of Carroll; his children: Alan (Judy) Murphy of Springfield, IL, Craig (Peggy) Murphy of Ft. Dodge, Lu Ann (Joe) Wittrock of Mendota Heights, MN and Lisa (John) Storto of Bloomingdale, IL; 8 grandchildren; 9 great-grandchildren; his sister, Shirley Huth of Cummings, GA; his sisters-in-law: Ruth Diers of Carroll and Betty Schechinger of Carroll; as well as other extended relatives and many friends. Ed was preceded in death by his parents; his son Keith Murphy; and his parents-in-law, Albert and Margaret Hannasch.

The family of Edward J. Murphy created this Life Tributes page to make it easy to share your memories.

Send flowers to the Murphy family.