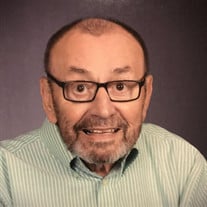 Edward “Butch” Fasbender, age 73, of Carroll, died Monday, May 22, 2017 at St. Anthony Regional Hospital in Carroll, surrounded by his family. Mass of the Christian Burial will be celebrated at 10:30 a.m., Thursday, May 25, 2017 at St. Lawrence Catholic Church in Carroll. The Celebrant will be Fr. Craig Collison. Music will be by Kate Cuddy, Jake Gute, and the St. Lawrence Choir. Lector for the funeral mass will be Don Derner. Gift Bearers will be: Caitlin Reis, Coral Fasbender, Lexi Fasbender, and Zoe Fasbender. Eucharistic Minister will be Shirley Fasbender. Casket Bearers will be: Blake Reis, Nick Reis, Colby Hemer, Colton Hemer, Connor Hemer, Mark Reis, and Carl Hemer. The Breda American Legion will form an honor guard for the funeral mass. Burial will be in the Carroll City Cemetery. Friends may call at the Sharp Funeral Home in Carroll after 5 p.m. on Wednesday where there will be a Christian Wake Service at 6:30 p.m. The casket will be moved to St. Lawrence Church on Thursday morning where visitation will resume at 9:30 a.m. and will continue until time of the funeral mass. Funeral arrangements are under the direction of the Sharp Funeral Home in Carroll and online condolences may be left for Butch’s family at www.sharpfuneral.com. Born on December 14, 1943 at Lake City, Iowa, Edward “Butch” was the son on Edward C. and Evelyn (Sanders) Fasbender. He attended Auburn Schools and later graduated from St. Bernard’s High School in Breda. Following his schooling Butch served in the United States Navy and following his honorable discharge returned to the Carroll area. On January 2, 1965, he was united in marriage to Patricia Derner at St. Mary’s Catholic Church in Auburn. The couple made their home in Carroll where Butch was employed with Pepsi-Cola as a route supervisor until his retirement. He also helped friends and family with their farm operations on the side. Butch and Pat loved spending time at their lake home in Okoboji. He also enjoyed watching television, camping, and loved the outdoors. Butch was a member of St. Lawrence Church and the Breda American Legion. Butch is survived by his wife Pat Fasbender of Carroll; his children: Tandy (Mark) Reis of Odebolt, Roxie (Carl) Hemer of Odebolt, Ryan (Jen) Fasbender of Clear Lake, and Tyler (Phyllis) Fasbender of West Des Moines; his grandchildren: Blake, Nick, and Caitlin Reis; Colby, Colton, and Connor Hemer; Lexi, Zoe, and Coral Fasbender; his great-grandchildren: Bristol, Cyrus, and Lyncon Hemer, and Bennett Reis; his brothers: Don (Shirley) Fasbender and Riley (Deanna) Fasbender; as well as several nieces, nephews, and other extended relatives. His parents preceded him in death.

The family of Edward "Butch" Fasbender created this Life Tributes page to make it easy to share your memories.

Send flowers to the Fasbender family.