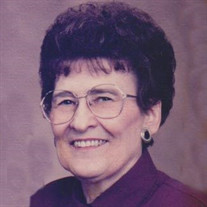 Edna Mae Trecker, 88 of Halbur, died Sunday, January 28, 2018 at St. Anthony Nursing Home in Carroll. Mass of the Christian Burial will be celebrated at 10:30 a.m. on Thursday, February 1, 2018 at St. Augustine Catholic Church in Halbur. The Celebrant will be Fr. Shinoj Jose. Con-Celebrants will be Fr. Steven Brodersen, and Fr. Dale Reiff. Mass Servers will be Kiley Trecker, Carlee Trecker, and Saydee Trecker. Music will be by Julie Sibbel, and the St. Augustine Choir. Lectors will be Jenna Niehaus, Emily Trecker, and Mallory Eischeid. Gift Bearers will be April Wittrock, Tonia Ortner, and Kristin Trecker. Eucharistic Minister will be Mary Kay Uhlenkamp. Honorary Casket Bearers will be Brett Trecker, Elizabeth Brunsvold, Mary-Katelyn Trecker, Morgan Eischeid, Madison Eischeid, Nate Trecker, and Brittany Trecker. Casket Bearers will be Tyler Trecker, Zac Trecker, Blake Wittrock, Kenzie Wittrock, Cody Williams, Stephanie Trecker, and Jace Trecker. Burial will be in the parish cemetery. Friends may call at St. Augustine Church in Halbur after 4 p.m. on Wednesday, where there will be a Rosary prayed at 5 p.m., and a Christian Wake Service will be held at 7 p.m. Visitation will resume at the church on Thursday morning from 9:30 a.m. until the time of the funeral mass. Funeral arrangements are under the direction of the Sharp Funeral Home in Carroll, and online condolences may be left for Edna’s family at www.sharpfuneral.com. Edna Mae was born April 20, 1929 in Roselle, Iowa. The daughter of Ed and Helen (Dopheide) Uhlenkamp. Her parents passed in 1937, Edna then made her home with Louis and Kathryn (Langel) Dopheide. Edna Mae attended school at Sacred Heart School in Templeton. On September 14, 1949 she was married to LaVern J. Trecker at Sacred Heart Church in Templeton, Iowa. Edna Mae was a dedicated homemaker, and an excellent cook and baker. She stayed busy taking care of her seven children. Edna Mae and LaVern moved to Halbur from the family farm south of Halbur in March of 1991. She resided in Halbur until October 2011, when she moved to Sunny Brook Assisted Living. In August 2015 Edna moved to St. Anthony’s Nursing Home. Through her years Edna Mae enjoyed going to dances, scrapbooking, playing cards, playing bingo, and spending time with her grandchildren. She was a member of St. Augustine Parish, and the St. Augustine Ladies Guild. Edna Mae is survived by her seven children: William (Jean) Trecker of Roselle, Thomas (Kris) Trecker of Carroll, Roxanne (Lyle) Wittrock of Adair, Becky (Frank) Eischeid of Halbur, Lori (Dennis) Williams of Halbur, James (Kerri) Trecker of Halbur, and Jeffrey (Leslee) Trecker of Halbur; twenty-three grandchildren, and twelve great-grandchildren. Also surviving are a sister: Arlene (Roman) Steffes of Carroll, a brother: Harry (Mary Kay) Uhlenkamp of Breda, and Shirley (Dopheide) Eischeid of Carroll, as well as many nieces, nephews, and other extended relatives. She was preceded in death by her husband LaVern in 1992, a son John in 1951; her parents: Ed and Helen Uhlenkamp; a sister Anita (Marvin) Weber; her aunt and uncle who raised her: Louis and Kathryn Dopheide, and their sons: Larry Dopheide, and Duane Dopheide; and Fred Eischeid. Edna fought dementia for many years. We are so blessed to belong in such a caring community who helped us keep Mom in her home as long as we did. We will all miss the beautiful, fun loving lady, our Mom.

Edna Mae Trecker, 88 of Halbur, died Sunday, January 28, 2018 at St. Anthony Nursing Home in Carroll. Mass of the Christian Burial will be celebrated at 10:30 a.m. on Thursday, February 1, 2018 at St. Augustine Catholic Church in Halbur. The... View Obituary & Service Information

The family of Edna Mae Trecker created this Life Tributes page to make it easy to share your memories.

Send flowers to the Trecker family.