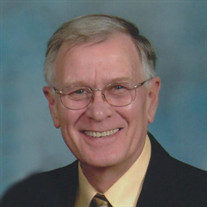 Ed Lawler, 73 of Carroll, died Monday, April 13, 2020 at his home in Carroll. A Private Family Funeral Service will be held at the Sharp Funeral Home in Carroll on Thursday, April 16, 2020. Fr. Dan Guenther will preside. Honorary Casket Bearers will be Ed’s Godsons: Danny Lawler, TJ Lawler, Craig Olerich, Rick Lawler, along with nephews Ben Malloy, and Jeremy Gray. Casket Bearers will be Ed’s family. Burial will be in St. Ann’s Cemetery in Vail with military honors conducted by the Carroll American Legion. A Live Stream Broadcast and recording of Ed’s service can be found by visiting the Sharp Funeral Home Carroll, Iowa YouTube Channel at this link: https://www.youtube.com/channel/UCqd2eeRJk5RTdEJoEooUoAQ. An icon on that page will be available by 10:55 a.m. Thursday. Born on September 12, 1946 in Carroll, Iowa, Edward was the son of John G. and Catherine (Lally) Lawler. Ed graduated from Kuemper High School with the Class of 1964 and served with the Army National Guard from 1966-1972. On September 5, 1970, Ed was married to Kathleen “Katie” Malloy at St. Ann’s Catholic Church in Vail, Iowa. Ed furthered his education at Creighton University where he received his Pharmacy Degree in 1976. Ed and Katie lived in Omaha for a brief time and moved to the Carroll area in 1977 where he became the pharmacist at St. Anthony Regional Hospital. He, along with his wife Katie, later owned Lawler Pharmacy from 1983-1995. Ed then worked for Carroll Clinic Pharmacy and Audubon Hospital Pharmacy, eventually retiring from Carroll Hy-Vee Pharmacy in 2014. Over the years Ed was involved in the Carroll community as a city council member along with being a member of the St. John Paul II Parish, Carroll Knights of Columbus, Carroll American Legion, and RPM Car Club. As a member of the Carroll Athletic Association, was instrumental in renovating the 1946 Carroll Merchants Park. Family, particularly his grandchildren, was a vital part of his life. He enjoyed playing cards, woodworking, bird watching, reading, and his ’64 Chevy SS. An avid sports fan, he enjoyed the College World Series, and Creighton, Notre Dame, Kuemper and Carroll Merchant games. Above all, Ed loved people. Ed left no one as a stranger, as everyone he met became a friend to him. Ed is survived by his wife Katie Lawler of Carroll; his children: Tim (Jane) Lawler of Carroll, Mark (Liz) Lawler of Dubuque, Jackie (Steve) Stoffel of Dubuque, and Ann (Alex) Eifler of Ankeny; his grandchildren: Taryn Lawler, Owen, Maura, Colin, and Aidan Lawler, Josh Stoffel and Kate Eifler; his step-grandchildren: Dustin (Anna Origer) and Danielle (Pierce) Julich-Mead; his step-great grandson, Maxx Julich; He is also survived by his siblings: Jim (Kathy) Lawler of Devine, TX, Mary (Gary) Jones of Ankeny, Tom (Jan) Lawler of Harlan, Dorothy (Myron) Olerich of Westside, Kevin (Cindy) Lawler of Carroll, Kristy (Mark) Poland of Carroll and Jeff (Nancy) Lawler of Granger; his mother-in-law, Helen Malloy of Westside; his brothers-in-law and sisters-in-law: Mary (Jim) Gray of Marion, Pat Malloy of Westside, Mike (Sue) Malloy of Omaha, NE and Sheila (Steve) Nebbia of Omaha, NE; as well as many nieces, nephews, other extended relatives and many dear friends. Ed was preceded in death by his parents; and his father-in-law, Clair “Pete” Malloy. Those wishing to make a memorial may direct it to St. Anthony Regional Cancer Center, Ed Lawler Memorial at Kuemper Catholic School Foundation or St. John Paul II Parish. Memorials may be mailed to: Sharp Funeral Home, 226 W. 8th Street, Carroll, IA 51401. Funeral arrangements are under the guidance of the Sharp Funeral Home in Carroll, and online condolences may be left for Ed’s family at www.sharpfuneral.com.

The family of Ed Lawler created this Life Tributes page to make it easy to share your memories.

Send flowers to the Lawler family.