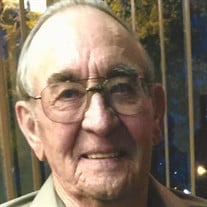 Dwaine Marvin Miskimins, 83 of Dedham, died Thursday, May 03, 2018 at his home in Dedham. Mass of the Christian Burial will be celebrated at 10:30 a.m., Monday, May 7, 2018 at St. Joseph’s Catholic Church in Dedham. The Celebrant will be Fr. John Gerald, assisted by Deacon Louis Meiners. Music for the funeral mass will be by Cindy Bauer and the St. Joseph’s Choir. Lector will be Rhonda Farrell. Gift Bearers will be Matthew Muhr, Calvin Muhr, Kelsey Muhr, Skyler Mansfield and Bree Mansfield. Casket Bearers will be: Jeff Hartl, Joe Hartl, Rodney Becker, Ronnie Becker, Keith Hartl, and Ryan Yager. Burial will be in St. Joseph’s Cemetery in Dedham with military honors conducted by the Dedham American Legion. Visitation will begin at 9:30 a.m. on Monday at St. Joseph’s Church in Dedham and will continue until time of the funeral mass. Funeral arrangements are under the direction of the Sharp Funeral Home in Carroll and online condolences may be left for Dwaine’s family at www.sharpfuneral.com. Dwaine Marvin Miskimins was born on May 9, 1934 in Audubon County the son of Walter and Catherine (Spoo) Miskimins. He spent his younger years near Coon Rapids where he attended country school. He served in the United States Army from 1956-1958. On November 18, 1961, Dwaine was united in marriage to Mary Ann Hartl at St. Joseph’s Catholic Church in Dedham. The couple made their home in Dedham where Dwaine farmed near Templeton and also worked for Milwaukee Railroad. He enjoyed fishing, tending to his yard and spending time with his family and friends, especially his grandchildren. Dwaine is survived by his daughters: Brenda (Tom) Muhr of Exira, and Sharon Mansfield of Carroll; his grandchildren: Matthew (Ashley) Muhr, Calvin Muhr and friend Kasie Simpson, Kelsey Muhr, Skyler Mansfield, and Bree Mansfield; his great-grandchildren: Kyle, Grace, and William Muhr; his siblings: Merle Miskimins of Ottumwa, Gene (Janice) Miskimins of Carroll, Marvin (Lois) Miskimins of Omaha; his sisters-in-law and brothers-in-law: Alice Miskimins of Perry, Otto (Ursula) Hartl Jr. of Missouri, Michael Hartl of Coon Rapids, Helen Yager of Coon Rapids, Rose (Roger) Becker of Willey, Anna Marie (Randy) Oleson of Bayard, Robert Hartl and friend Janine Glidden of Audubon and Mary Lou Hartl of Carroll; as well as many nieces, nephews, and other extended relatives. Dwaine was preceded in death by his parents; his wife Mary Ann in 2005; and his brother, Glen Miskimins.

The family of Dwaine Miskimins created this Life Tributes page to make it easy to share your memories.

Send flowers to the Miskimins family.