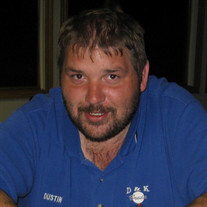 Dustin Hoffman, 33 of Breda, died Thursday, April 4, 2019 at Mercy Medical Center in Des Moines, Iowa. Funeral Services will be held at 1 p.m., Monday, April 8, 2019 at the Sharp Funeral Home in Carroll with Fr. Gary Snyder officiating. Casket Bearers will be: Russ Boes, Matt Koster, Brian Koster, Ricky Bruning, Rick Bruning, Stacy Bellcock, Jim Wittmaack, and Tracy Buck. Burial will be in St. Bernard's Cemetery in Breda. Visitation will be held from 3-6 p.m. on Sunday at the Sharp Funeral Home in Carroll. Additional visitation will be held one hour prior to services on Monday at the Sharp Funeral Home in Carroll. Following the burial in Breda, Dustin's family invites everyone to the Breda American Legion Hall for a luncheon. Funeral arrangements are under the direction of the Sharp Funeral Home in Carroll and online condolences may be left for Dustin's family at www.sharpfuneral.com. Dustin “Heavy D” Hoffman, the son of Kevin and Lisa (Dorenkamp) Hoffman, was born on February 26, 1986 in Mason City, Iowa. He grew up in the Lidderdale and Breda area and graduated from Kuemper Catholic School in Carroll in 2004. He attended Kirkwood Community College for Culinary Arts before returning back to the Carroll area where he started his working career. He started work at the Breda Golf Course in 2006 as a cook, eventually adding co-manager to his title. Wednesday nights you could find him swinging a golf club with his friends for men’s league. He enjoyed hunting pheasants and deer and never passed on an opportunity to go target shooting. When he was little, he liked to go fishing with his grandpa Hoffman and continued that love as an adult. Dustin was always up for a good time; a game of pinochle or euchre on the holidays or at Reds, a game of foosball with friends or watching his Iowa State Cyclones. One of Dustin’s biggest passions was cooking. He loved to cook for anybody and everybody. In the summer you could find him grilling steaks or a burger to your liking, but he prided himself on his prime rib. He is survived by his parents Kevin and Lisa Hoffman of Breda, his brother Travis (Nichole) Hoffman of Odebolt, his sisters Abby Hoffman and Ashley Hoffman of Minneapolis, MN; his maternal grandmother Janice Dorenkamp of Thornton and paternal grandparents Ed and Lorraine Hoffman of Glidden; his aunts and uncles Allyn and Linda Waddingham, Gary and Beth Dorenkamp, Alan and Julie Dorenkamp, Dave and Jan Dorenkamp, Randy and Terri Hoffman, Stan and Cate Hoffman, Connie and Jeff Larson, Rhonda and Rick Snyder, Brian Hoffman, Dean Hoffman, Jeff and Janet Hoffman, Craig Hoffman, Sheri and Brian Rodenkirk, Tami and Mike Halverson, and Carmen and Adam Pieper, along with many cousins and friends. Dustin is preceded in death by his maternal grandfather Richard Dorenkamp.

The family of Dustin Hoffman created this Life Tributes page to make it easy to share your memories.