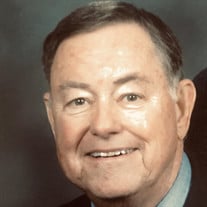 Dr. Robert Langenfeld, 81 of Carroll, died unexpectedly, on Thursday, January 31, 2019 at his home in Carroll. Mass of the Christian Burial will be celebrated at 10:30 a.m., Monday, February 4, 2019 at St. John Paul II Parish – Holy Spirit Church in Carroll. The Celebrant will be Fr. Kevin Richter. Mass server will be Jack Ulveling. Music will be by Dr. Franklyn Busby, Pastoral Musician and the Holy Spirit Resurrection Choir. Lectors for the funeral mass will be Dr. Nicholas Fangman and Dr. Karl Eischeid. Gift Bearers will be: Piper Kirsch, Nile Langenfeld, Kylee Langenfeld, Michaela Bolding, Parker Heisterkamp, Blair Heisterkamp, Jacquelyn Janning, Sydney Masching, Mari Cosentino-Sheerlinck and Brianna Cosentino. Eucharistic Minister will be Dr. Martin Halbur. Casket Bearers will be: Dr. Robert Langenfeld, Mike Masching, Jon Heisterkamp, Dan Flanagan, Dan Bean, Nic Alex, Justyn Alex, Carson Kirsch, Bennett Heisterkamp, Spenser Masching, Conner Janning and Dr. Jared Bolding. Burial will be in the Carroll City Cemetery with military honors conducted by the Carroll American Legion. Friends may call at the Sharp Funeral Home in Carroll after 2 p.m. on Sunday where there will be a Christian Wake Service at 4:30 p.m. The casket will be moved to Holy Spirit Church on Monday morning where additional visitation will be held from 9-10:15 a.m. In lieu of flowers, memorials may be left at the funeral home or the church for the American Diabetes Association. Funeral arrangements are under the direction of the Sharp Funeral Home in Carroll and online condolences may be left for the Langenfeld family at www.sharpfuneral.com. Born on January 11, 1938 at Carroll, Iowa, Robert was the son of Felix and Bernadette (Conroy) Langenfeld. He attended St. Joseph’s Grade School and later graduated from Carroll High School. Bob received his undergraduate and his D.D.S. from Creighton University in Omaha, Nebraska. On October 8, 1960, Bob was united in marriage to June Brown at St. John’s Cathedral on the campus of Creighton University. He served in the United States Navy where he was stationed at the Marine Corp Base El Toro in Santa Ana, California from 1961-1963. Bob returned to Carroll where he practiced at Carroll Dental Associates for 44 years until his retirement. In his spare time he enjoyed fishing, hunting, gardening and playing tennis. Bob was happiest spending time with his wife, children and grand-children and has enriched our lives with wisdom, instilled the importance of family, which we can all cherish in memory of him. Most recently, the family celebrated his oldest granddaughter’s wedding and his 80th birthday in Sonoma, CA- a trip full of memories and photo opportunities for the family to treasure. Bob was an avid pilot and served on the Airport Commission Board for 24 years. He always enjoyed Monday night bridge club as well as hosting family and friends where he was considered a “foodie” and master griller. Bob was a former member of the Elks Club, Knights of Columbus and the Holy Spirit School Board. He was also a member of St. John Paul II Parish – Holy Spirit Church where he served in many capacities including as a Eucharistic Minister and Lector. Left to cherish his memory is his wife June Langenfeld of Carroll; his children: Teri (Dan) Flanagan of Tuscan, AZ, Lisa Langenfeld of Ames, Traci Heller of Chicago, Renee (Mike) Masching of Omaha, Laura (Jon) Heisterkamp of Council Bluffs, and Dr. Robert (Heather) Langenfeld of Omaha; 18 grandchildren; 3 great-grandchildren; his sister Sharon (Tom) Collison of Halbur; his brothers-in-law and sisters-in-law: Jim Ulveling of Carroll, Dr. James (Sue) Brown of Sioux City, and Kay Arellano of Glendive, MT; as well as many nieces, nephews, other extended relatives and many friends. He was preceded in death by his parents, Felix and Bernadette Langenfeld; his daughter, Lynn Langenfeld; and his sister, Sandra Ulveling.

The family of Dr. Robert Langenfeld created this Life Tributes page to make it easy to share your memories.

Send flowers to the Langenfeld family.