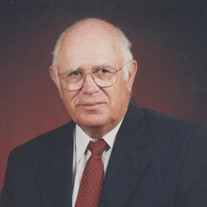 Dr. Richard William Collison, age 92, of Carroll passed away peacefully surrounded by his family on Monday, March 9, 2020 at St. Anthony’s Hospital. Mass of the Christian Burial will be celebrated 2 p.m., Friday, March 13, 2020 at St. John Paul II Parish - St. Lawrence Church in Carroll. The Celebrant will be Fr. Kevin Richter. Music will be by Marcy Anderson, Shari Schulte and the St. Lawrence Choir. Lector for the Funeral Mass will be Nicholas Collison. Gift Bearers will be Dick’s granddaughters. Eucharistic Minister will be Jim Middendorf. Casket Bearers will be Dick’s grandsons. The Carroll 4th Degree Knights of Columbus will form an honor guard for the funeral mass. Burial will be in Mt. Olivet Cemetery in Carroll with military honors conducted by the Carroll American Legion. Visitation will be held from 5-7 p.m. on Thursday at St. Lawrence Church in Carroll. The rosary will be recited at 6 p.m. by the Carroll Knights of Columbus. Additional visitation will be held from 1-1:45 p.m. on Friday at the church. Funeral arrangements are under the guidance of the Sharp Funeral Home in Carroll and online condolences may be left for the Collison family at www.sharpfuneral.com. He was born on August 21, 1927 in Carroll, a son of Fred F. and Mary (Hoeft) Collison. His early education was completed at Saint Joseph Grade School and in 1945 Richard (Dick) graduated from Carroll High School. He joined the U.S. Navy, attended Navy medic school in San Diego and served aboard the hospital ship USS Repose in the South Pacific until 1947. In 1949 he married Maxine Drees at St. Lawrence Church. Together they made their home in Ames, Iowa, as Dick enrolled in the School of Veterinary Medicine and Maxine worked nights as a nurse. Over the next six years they raised 4 children at Pammel Court. To make ends meet, Dick operated a propane business in Pammel Court. Upon graduation in the spring of 1955, he and Maxine moved back to Carroll and founded the Carroll Veterinary Clinic. In 1965 Dr. Collison sold his interest to the remaining partners of the practice. His next venture was cofounding Mid-States finance company. He was president until it was acquired by Continental Western Insurance Company in West Des Moines, Iowa. Several years later, he became president of Continental Western until 1977 when he retired after Continental was acquired by Northwestern Insurance of Milwaukee Wisconsin. Dick loved his hometown and devoted many hours and efforts to the betterment of Carroll. He always enjoyed building things; thus he was one of the first to promote rebuilding downtown Carroll during 1960s urban renewal program. Soon thereafter, he and his family’s trust became a major owner of the properties in Westgate Mall. Then when he saw the need, he developed the Collison addition for over 100 homes in North East Carroll. As a farm boy, his love for farmland never subsided. When economic conditions started to change, he began acquiring farmland and remained deeply involved with the land and the farmers until the end. He was president of the Development Corporation of Carroll and worked with 30 other like-minded progressive leaders and businesses. Together they created the business park east of Carroll, which attracted Pella, American Home Shield and Delevan. He served on the Carroll City Council for two terms as a proponent of proactive yet conservative and efficient city government. His first wife Maxine, a “world class mother” of their nine children, died in 1991. In 2005 he married Mary Jane Neppl at St. Lawrence Church. She brought 14 years of joy to his life. Dr. Collison had many hobbies and interests. He loved restoring old Heider tractors with the help of Omar Langenfeld, and classic cars with his sons. Dick spent as much time as possible at the woods house on the Racoon River. He enjoyed the weekly golf matches with lifelong friends and winters in Arizona. He was a member of the order of Knoll, Iowa State University, a 3rd and 4th degree knight of Columbus, St Lawrence Parish, where the hall bears the Collison name, American Legion, and various other groups. His real passion was the welfare of his large family and the Carroll community. He was attracted to challenges, had an opinion on almost everything and fought fiercely for those that didn’t have a voice. He is survived by his wife Mary Jane and his children; Barb (Mike) Mosman of Carroll, Cheryl (Jim) Middendorf of Des Moines, Dr. Mark (Patty) Collison of Carroll, Deb Collison (Walt) of Sioux City IA, Joan Collison of Jefferson IA, Richard A. (Sheila) Collison of Fremont, CA, Nancy Cattaneo of Tulsa OK, Alan (Gina) Collison of Minneapolis MN, and Tracy Collison (Michael) of Long Beach, CA; 4 step children Bill (Diana) Neppl, Pat (Randy) Fields, Gayle (Denny) Smith, Brian (Kim) Neppl. He leaves behind 21 grandchildren, 24 great-grandchildren, his sisters Dorothy Winders of Palencia California and Cathleen Schwarzkopf of Daytona Beach Florida. He was preceded in death by his parents, his first wife Maxine (Drees) Collison, a brother Ned Collison of Carroll, an infant baby sister Mary Joan, and his grandson Chad Mosman.

The family of Dr. R.W. "Dick" Collison created this Life Tributes page to make it easy to share your memories.

Send flowers to the Collison family.