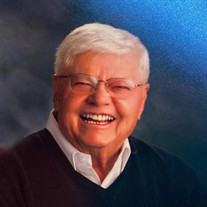 Dr. Norman Duane Schulz, DDS, 89 of Carroll passed away peacefully on Friday, January 8, 2021 at St. Anthony Regional Hospital in Carroll. A Funeral Mass will be held at 1:30 p.m., Thursday, January 14, 2021 at St. John Paul II Parish – St. Lawrence Church in Carroll. The Celebrant will be Fr. Timothy Schott. Music will be by Jane Heithoff. Lector for the Funeral Mass will be Steve Schulz. Eucharistic Minister will be Karen Hess. Burial will be in Mt. Olivet Cemetery in Carroll. There will be no public visitation prior to the Funeral Mass. Those in attendance are required to wear a face covering and abide by current social distancing guidelines. Funeral arrangements are under the guidance of the Sharp Funeral Home in Carroll and online condolences may be left for Norm’s family at www.sharpfuneral.com. Should one desire, memorials by be mailed to Dr. Norman Schulz Family, c/o Sharp Funeral Home, 226 W. 8th St. Carroll, IA 51401, for a later designation. Dr. Norman Duane Schulz was born on August 26, 1931 in Carroll, Iowa. He died at St. Anthony Hospital of complications from a stroke, with his loving family around him. He was a son of Ted and Cecil (Marchant) Schulz. Norm grew up in Carroll and graduated from Carroll High School in 1949. He attended the University of Iowa and the University of Iowa Dental School, graduating in 1955. Norm married Ann Waters on July 16, 1955 at St. Lawrence Catholic Church in Carroll. He and Ann moved to Fort Hood, Texas where he served two years in the U.S. Army. They moved back to Carroll in 1957 where he opened a dental practice. Norm practiced dentistry in Carroll for forty years, retiring in 1997. Always up for a new experience, he and Ann then spent a year in American Samoa where Norm practiced dentistry at the Lyndon Baines Johnson Medical Center. Norm was very active in the Carroll community. He served for 12 years on the Carroll City Council. He was a member of the Carroll Chamber of Commerce, where he served on the board and from which he received the Community Service Award in 1987. He was a member of the Chamber’s Carroll Area Development Commission and a board member of St. Anthony Regional Hospital. Norm was a member of the Knights of Columbus, the Elks Club, the Carroll Community Theater, the Carroll Country Club and was active in the Carroll Little League where he loved his role as an umpire. Norm was a strong supporter of education, serving as President of the St. Lawrence School Board, a member of the Kuemper School Board and the Carroll County Citizens for Educational Freedom, as President of the Sioux City Diocese Board of Education, and as Chairman of its Development Program. During the 1970’s, Norm led an effort in Iowa to allow access to school bus transportation for parochial school students. Norm was enthusiastic and passionate about his many pursuits. A hunger for fresh spinach began a forty year gardening hobby, for which he was eventually honored as a Master Gardener by the Iowa State Extension office. Not only did Norm deliver vegetables to friends and family, but every year donated produce to the local Food Bank of Iowa. His interest in gardening coincided with his passion for cooking. Norm and Ann constantly experimented with new dishes and recipes, having fun with all of them including the failures. Norm was an avid golfer and thoroughly enjoyed countless afternoons on the course with his friends, teeing off nearly every summer Saturday at 12:22 pm. Norm loved to travel and meet new people. It did not matter whether it was a lake in Minnesota, the ski slopes of Colorado, the music and theater of Chicago or New York, the Italian countryside, or the South African veld, Norm was an adventurer at heart. Most of all Norm dearly loved his family and many friends, always ready to share lots of laughter and a great story. Norm is survived by his wife Ann of Carroll, and his ten children and families: Steve (Linda) Schulz of St. Paul, Minnesota, Dave (Rhonda) Schulz of Marion, Iowa, Dan Schulz of California, Tom (Mande) Schulz of Alamo, California, John (Michelle) Schulz of Sonoma, California, Rob Schulz of Chicago, Illinois, Sue (Steve) Anderson of Urbandale, Iowa, Lisa (Jeff) Lorenger of Iowa City, Iowa, Jane (Greg) McRae of Lyons, Colorado, and Mike Schulz of Carroll; and eighteen grandchildren: Aimee, Kelsey, Conor, Abby, Harrison, Brennan, Erik, Samuel, Annie, Chezney and Jared Schulz; Emma Marshall McRae; Alex, Maddie and Joe Anderson; and Kathryn, Laura and Will Lorenger. Norm was preceded in death by his parents: Ted and Cecil Schulz; his father- and mother-in-law, A.J. and Mary Waters; his brother Ted and sister-in-law Delores Schulz; his brothers-in-law Joe, Jim, Bill and Dan Waters; and his sister-in-law Marg Tormey.

The family of Dr. Norman Schulz DDS created this Life Tributes page to make it easy to share your memories.

Send flowers to the Schulz family.