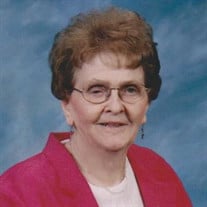 Dorothy Bruening, age 92, of Carroll, and formerly Maple River, died Sunday, January 20, 2019 at St. Anthony Nursing Home in Carroll. Mass of the Christian Burial will be celebrated at 10 a.m. Monday, January 28, 2019 at St. John Paul II Parish, Holy Spirit Church in Carroll. The Celebrant will be Fr. Gary Snyder. Music will be by Dr. Franklyn Busby, Pastoral Musician. Mass Servers will be Braxton Vonnahme, Jack Badding, and Ashlyn Badding. Lectors will be Amy Maynes, Lara Haukap, and Megan Houston. Gift Bearers will be Leah Clark, Amanda Hill, Maggie Myers, Abby Reuter, Kelsey Badding, and Teresa Vonnahme. Eucharistic Ministers will be Joan Badding, Joan Kerwood, and Mary Schreck. Casket Bearers will be Josh Tan Creti, Dan Clark, Michael Kerwood, Aaron Thielen, Brian Badding, Brett Nieland, and Samuel Reuter. Burial will be at St. Francis Cemetery in Maple River. The St. Anthony Hospital Auxiliary will form an honor guard for the funeral mass. Friends may call at the Sharp Funeral Home in Carroll, after 2 p.m. on Sunday where there will be a Rosary Prayed at 3 p.m. and a Christian Wake Service will be held at 4:30 p.m. The casket will be moved to Holy Spirit Church on Monday morning where visitation will resume from 9-9:45 a.m. In lieu of flowers memorials may be directed to Dorothy’s family to be donated to the St. Anthony Cancer Center, or the Down Syndrome Association of Greater St. Louis, Missouri. Funeral arrangements are under the direction of the Sharp Funeral Home in Carroll, and online condolences may be left for Dorothy’s family at www.sharpfuneral.com. Dorothy, the daughter of Michael and Catherine (Zitzlsperger) Schultes was born on May 16, 1926 at Willey, Iowa. She grew up on the family farm near Willey, attended St. Mary’s Grade School, and later graduated from St. Angela’s Academy in Carroll. After her formal education, Dorothy worked as a bookkeeper for a short period of time. On April 3, 1945, Dorothy was united in marriage to Anthony Bruening at St. Mary’s Catholic Church in Willey to this union seven children were born. The couple made their home north of Maple River; where Dorothy and Anthony farmed together until they retired in 1991, and moved into the Carroll community. In addition to farming, Dorothy worked as a C.N.A., and a bookkeeper at the Carroll Manor. Above all, Dorothy made it her main priority to raise and care for her husband and seven children. Dorothy enjoyed watching gameshows, card club, bingo, praying the rosary daily, and being an ardent Chicago Cubs fan. Most of all Dorothy enjoyed the fun and laughter her children and grandchildren brought to her life. Dorothy was a former member of St. Francis of Assisi Parish of Maple River, current member of St. John Paul II Parish in Carroll, and the St. Anthony Hospital Auxiliary. Left to celebrate Dorothy’s life are her children: Pat Tan Creti of Carroll, Joan (David) Kerwood of Boone, Barbara (Duane) Thielen of Carroll, Joyce (Marc) Nieland of Carroll, Angela (Michael) Reuter of St. Louis, MO, Mark Bruening of Maple River ,son-in-law James Clark of Maple River, 16 grandchildren, 33 great-grandchildren with 1 more on the way, and 3 great-great-grandchildren; her sisters Janet Snyder of Carroll, and Loretta Hannasch of San Antonio, TX; sisters-in-law: Mary Lou Schultes of Carroll, Sister Marguerite Bruening F.S.P.A. of Wisconsin, and Phyllis Etringer of Omaha, NE; and a brother-in-law: Brother Michael Bruening, O.S.F. Eureka, MO; as well as many nieces, nephews, and other extended relatives. Dorothy was preceded in death by her husband Anthony in 2001, a daughter Mary Jo “Josie” Clark in 1983, sons-in-law: Jack Badding in 1984, and Martin Tan Creti in 1997; a granddaughter: Sarah Tan Creti in 2016; her parents Michael and Catherine Schultes; her parents-in-law Joseph and Katherine Bruening; and her siblings: Lavine Tigges, Alvera Irlbeck, Louise Schultes, Lynette Steinkamp, Marilyn Pletchette, Leon Schultes, Arthur Schultes, and Mary Jo, in infancy.

The family of Dorothy Bruening created this Life Tributes page to make it easy to share your memories.

Send flowers to the Bruening family.