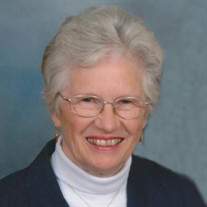 Donna Murphy, age 94, of Carroll, died Friday, March 25, 2022 at St. Anthony Nursing Home in Carroll. Mass of the Christian Burial will be celebrated at 11 a.m. Wednesday, March 30, 2022 at St. Lawrence Church – St. John Paul II Parish in Carroll. The Celebrant will be Fr. Timothy Schott. Music will be by Kathy Halbur and Kathleen Macke. Lector will be Philip Storto. Gift Bearers will be Laila Johnson, Lucy Johnson, Leah Johnson. Eucharistic Minister will be Betty Schmitz. Casket Bearers will be Sean Murphy, Jeff Wittrock, Tom Wittrock, Luke Wittrock, Jake Wittrock, and Phil Storto. Burial will be in Mt. Olivet Cemetery in Carroll. The Carroll Catholic Daughters of the Americas and the St. Anthony Hospital Auxiliary will form an honor guard for the funeral mass. Visitation will be held from 9:30 to 10:45 a.m. Wednesday at St. Lawrence Church in Carroll. In lieu of flowers memorials may be directed to the Kuemper Catholic Schools Foundation. Funeral arrangements are under the guidance of the Sharp Funeral Home in Carroll, and online condolences may be left for Donna’s family at www.sharpfuneral.com. Donna, the daughter of Albert and Margaret (Eischeid) Hannasch was born on March 14, 1928, in Carroll, Iowa. She grew up in Arcadia and graduated from St. Angela’s Academy in Carroll in 1946. She married Edward J. Murphy on June 18, 1947. They lived in Chicago briefly but settled in Carroll in 1948 where they lived and raised their family until her death. Donna was a long-time member of St. Lawrence Church and belonged to the Guild. She also belonged to the Catholic Daughters of the Americas and was an active volunteer with the St. Anthony Hospital Auxiliary. She was a lifelong blood donor and volunteered at New Hope Village Bargain Shop as well as Meals on Wheels. One of Donna’s favorite hobbies was playing Bridge especially at Bridge Club. Donna will be remembered for being an outstanding homemaker, baking many pies, and a beautiful seamstress. Most of all Donna enjoyed her grandchildren and great-grandchildren. Donna is survived by her children: Alan (Judy) Murphy of Springfield, IL, Craig (Peggy) Murphy of Ft. Dodge, LuAnn (Joe) Wittrock of Mendota Heights, MN, and Lisa (John) Storto of Bloomingdale, IL; eight grandchildren, 11 great-grandchildren; her sister, Betty Schechinger of Carroll, and her sister-in-law: Shirley Huth of Cumming, GA, as well as many nieces, nephews, and other extended relatives. Donna was preceded in death by her parents; husband Ed in 2017; son, Keith in 2013; siblings: Eileen (Elmer) Schmitz, and Ruth (Don) Diers; brothers-in-law: Don Schechinger and Marvin Huth.

The family of Donna Murphy created this Life Tributes page to make it easy to share your memories.

Send flowers to the Murphy family.