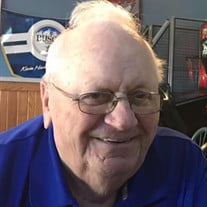 A Recording of Don's Funeral Mass can be found by clicking this link: https://www.youtube.com/watch?v=V-ZbzpJYeUw&feature=youtu.be. Donald J. “Don” Wieland age 90, of Carroll, died on Tuesday November 10, 2020 at St. Anthony Nursing Home in Carroll. Mass of the Christian Burial will be celebrated at 10 a.m. Saturday, November 14, 2020 at St. Lawrence Church- St. John Paul II Parish in Carroll. The Celebrant will be Fr. Kevin Richter. Music will be by Jane Heithoff, Al Heinrichs, and Harold Danner. Lectors will be Pat Wieland and Haley Wieland. Eucharistic Minister will be Becky Snyder. Casket Bearers will be Ryan Klocke, Jason Klocke, Nathan Klocke, Josh Smouse, Jake Smouse, Jess Smouse, and Ben Wieland. Burial will be in Mt. Olivet Cemetery with military honors conducted by the Carroll American Legion. Visitation without greeting of the family will be held from 9 – 9:30 a.m. Saturday morning at St. Lawrence Church. Those in attendance are required to wear a face mask, and abide by COVID-19 restrictions. In lieu of flowers memorials may be directed to St. Anthony Regional Hospital Hospice. A link to the recording of Don’s service will be available on the Sharp Funeral Home- Carroll YouTube Channel at https://www.youtube.com/channel/UCqd2eeRJk5RTdEJoEooUoAQ. Please allow up to 24 hours from the time of the funeral mass for the recording to appear. Funeral arrangements are under the direction of the Sharp Funeral Home in Carroll, and online condolences may be left for Don’s family at www.sharpfuneral.com. Those wishing to mail a memorial may direct it to Don Wieland Family, C/O Sharp Funeral Home, 226 W. 8th Street, Carroll, IA 51401. Born on June 15, 1930 at Carroll Iowa, Donald was the Son of Lawrence and Mary Wieland. He grew up near Carroll and graduated from Carroll High School in 1948. On April 21, 1952, Donald was united in marriage to Evelyn Masching at Sts. Peter and Paul Catholic Church in Carroll. Don was drafted into the United States Army in the fall of 1952 and proudly served the country in the Korean War. After Don’s military service he and Evie made their home in Carroll Iowa for a brief time, before settling on their family farm north of Carroll. Where he lived until Evie’s death in 2017, then moving to Westwood Knolls Retirement Center. Throughout his life Don was a devoted husband and father and ran the farming operation which was a true passion. Don “Oink” spent many years working at the Carroll Livestock Auction (Sale Barn) and ended his working life mowing fairways at the Carroll Municipal Golf Course. Don really enjoyed gardening and He and Evie always had a large garden even though every year they swore they would not make as big of one the next year. If you knew Don, you knew he enjoyed putting puzzles together and wore out many decks of cards playing solitaire. Don was a friend to everyone and never met a stranger. When travelling he would always find people to talk to and he enjoyed learning where everyone was from. Mostly Don enjoyed his family and spending a lot time with all of grandkids, great grandkids and family get-togethers. Left to celebrate Donald’s life are his children: Steve (Mary Lou) Wieland of Westside, Tom “Tank” (Joni) Wieland of Carroll, Pam (Ron) Smouse of Springfield MO and Patrick (Katrina) Wieland of Denver CO; and son-in-law Dennis Klocke of Templeton; 13 grandchildren and 15 great – grandchildren. Also surviving are his siblings: Paul Wieland of Carroll, Beatrice (Richard) Pudenz of Carroll; sister-in-law Edna Ludwig of Carroll, Brother-in-law James “Jim” (Joyce) Masching of Carroll, Brother-in-law Don Masching of Carroll, Sister-in-law Lois (Chuck) Neumayer of Carroll. Donald was preceded in death by his wife Evelyn: daughter Linda Klocke; a son in infancy: Michael, a son-in-law David Imming; a close friend: Joyce Hindman; his siblings Marian Wieland, F.S.P.A; Dolores (LaVern) Pudenz; Maxine (Leon) Schultes: in-laws; Louie Masching, Ed Masching, Rosemary Schon, Mary Pudenz, Lorraine (Rainy) Wieland,

The family of Donald J. Wieland created this Life Tributes page to make it easy to share your memories.

A Recording of Don&#39;s Funeral Mass can be found by clicking this...