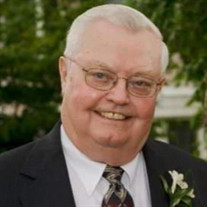 The direct link to the livestream of the service can be found by clicking here https://youtu.be/oBWYF5Xezgg Donald Raymond Tigges, 86, of Carroll, died peacefully Sunday, November 28 surrounded by family at Accura Nursing Home in Carroll, Iowa. Mass of the Christian burial will be celebrated at 10 a.m. Friday, December 3, 2021, at St. Lawrence Church in Carroll. The Celebrant will be Fr. Patrick Behm. Music will be by Kathy Halbur and Sherry Loughran. Special music will be by Allie Smith and Olivia Tigges. Eucharistic Minister will be Jackie Reineke. Lector will be Emily (Tigges) Booth. Gift Bearers will be Olivia Tigges, Hahley Wiltse, and Austin Tigges. Casket Bearers will be Ben Tigges, Garrett Tigges, Avrie Tigges, Torie Smith, Jakob Tigges, Grant Tigges. Honorary Casket Bearers will be Emily Booth, Hahley Wiltse, Olivia Tigges, Allie Smith, and Austin Tigges. Burial will be at 12:30 p.m. Friday, in St. Joseph’s Cemetery in Dedham with military honors conducted by the Dedham American Legion. Visitation will be held from 4-7 p.m. on Thursday, December 2, 2021, at the Sharp Funeral Home in Carroll. Additional visitation will be held from 9-9:45 a.m. on Friday at the church. Funeral arrangements are under the guidance of the Sharp Funeral Home in Carroll and online condolences may be left for Don’s family at www.sharpfuneral.com. In lieu of flowers, memorials will be forwarded to the family’s charity of choice. The Tigges family requests that masks be worn at the visitation and the Funeral Mass. Don was born September 12, 1935, as the youngest of eight children to Joseph and Anna Tigges in Dedham, Iowa. He attended St. Joseph Catholic elementary school in Dedham and after working the family farm for four years, served in the Army from 1956-1958. After his honorable discharge he continued in the Army Reserves for two additional years. After serving his country he worked at Kuemper High School. It was during this time he met his one and only love of 59 years. Don married Marlene Frances Reinart on June 23, 1962, at St. Peter and Paul Catholic Church in Carroll presided by Father Louis H. Kollasch. They remained in Carroll where they raised five children. He worked for Ocama Food Company, Omar Bread Company and Fuller Brush before being hired as a car sales associate for Bill Burgess Motors. He continued as a respected salesperson in Carroll for over 42 years, retiring in 2005 from Lou Walsh Motors. Don loved so many of the simple things in life. He was an avid reader, loved a good steak, ballgame, or movie, but mostly enjoyed any time spent with his wife and family. He loved sports of all kinds, favoring the Green Bay Packers and the Chicago Cubs (2016 was a very good year!). You could frequently catch him in a friendly bantering of politics or writing a letter to the editor to emphasize his point. Don loved movie quotes and telling stories. He prided himself on his honesty and integrity, which makes it so ironic that one of his most used comments was “Don’t let the truth get in the way of a good story.” Don is survived by his wife, Marlene of Carroll; five children: Mark (Teresa) Tigges of Carroll, Michael Tigges of Olathe, KS, Lisa (David) Smith of Tacoma, WA, Matthew (Jennifer) Tigges of Waukee and Anthony Tigges of Carroll. Eleven grandchildren: Ben (Andrea) Tigges of Fort Gordon, GA, Emily (Collan) Booth of Carroll, Olivia and Jakob Tigges of Olathe, KS, Allie and Torie Smith of Tacoma, WA, Garrett, Avrie and Grant Tigges of Waukee, IA, Austin Tigges of Carroll and Hahley (Kyle) Wiltse of Knoxville, TN; four great-grandchildren, Noah, Eli, and Simon Tigges and Lincoln Fisher; sister-in-law Mary Lou Hartl, brother-in-law Merline (Betty) Reinart; and many nieces and nephews. Donald was preceded in death by his parents, Joseph and Anna (Brauckman) Tigges, father and mother-in-law Clarence and Dorothy Reinart. Five brothers, Leonard, Arthur, Aldred, Edward, and Joseph Tigges; three sisters Alma Klocke and Martina VanDyke, and Lillian in infancy. Sisters-in-law Margie Tigges, Lavina Tigges, Wanda Tigges, Rita Tigges and Freda Tigges, and Margaret Reinart; brothers-in-law Raymond Klocke, Aldebert “Tubby” Irlbeck, Norbert VanDyke, and Joseph Hartl.

The direct link to the livestream of the service can be found by clicking here https://youtu.be/oBWYF5Xezgg Donald Raymond Tigges, 86, of Carroll, died peacefully Sunday, November 28 surrounded by family at Accura Nursing Home in Carroll, Iowa. Mass... View Obituary & Service Information

The family of Donald R. Tigges created this Life Tributes page to make it easy to share your memories.

The direct link to the livestream of the service can be found...