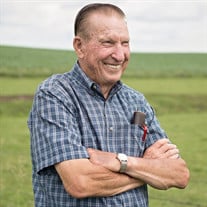 Donald Hinners, 87 of Carroll and formerly of Manning, died Sunday morning, July 9, 2017 at his home in Carroll surrounded by his family. Mass of the Christian Burial will be celebrated at 10:30 a.m. Thursday, July 13, 2017 at St. Augustine Catholic Church in Halbur. The Celebrant will be Fr. Shinoj Jose. Con-Celebrant and homilist will be Fr. Steve Brodersen. Music will be by Julie Sibbel and the St. Augustine Choir. Lectors for the funeral mass will be Michelle Bonnema and MacKenzie Pudenz. Gift Bearers will be Presley Pudenz, Pryia Pudenz, and Lucas Norton. Eucharistic Ministers will be Barb Sturm and Julie Eischeid. Casket Bearers will be Joe Hinners, Dan Norton, Brandon Hinners, Mason Hinners, Noah Hinners, Mike Norton, Thomas Boyd, and Jim Brockpahler. Burial will be in the parish cemetery with military honors conducted by the Arcadia American Legion. Friends may call at the Sharp Funeral Home in Carroll after 4 p.m. on Wednesday where there will be a rosary at 5 p.m. and a Christian Wake Service at 7 p.m. The casket will be moved to St. Augustine Church on Thursday morning where visitation will resume at 9:30 a.m. and will continue until time of the funeral mass. Funeral arrangements are under the direction of the Sharp Funeral Home in Carroll and online condolences may be left for Don’s family at www.sharpfuneral.com. Don was born to Arthur and Loretta (Trecker) Hinners on April 8, 1930, in a farmhouse near Arcadia, Iowa. In 1935, he moved with his family to the Manning area and attended the Ewoldt Country School and later the St. Augustine Catholic School in Halbur. In 1952 Don was drafted into the U.S. Army and was stationed in Kaiserslautern, Germany during the Korean War, during which time he received his GED. On May 25, 1954, Don was united in marriage to Lois Potthoff at St. Augustine’s Catholic Church in Halbur. Don and Lois settled on a farm north of Manning where they raised their seven children and lived for over 50 years. A member of St. Augustine’s Catholic Church, Don served as a Eucharistic minister for many years. He was a member of the Ehlers-Gerken Post #694 of the Arcadia American Legion, and enjoyed marching with the Legion each Memorial Day. Don was an active member of his community, serving on numerous boards and committees and striving always to find the right way and the right people to get things done. He helped organize the Halbur University Scholarship Fund in 1975 and served on the Board of Deans for the Halbur U Foundation from its establishment in 1975 until his retirement in 2004. Along with other local businessmen, Don owned the Manning Trust & Savings Bank for ten years, where he served as a Director. Don also owned the Springfield Golf Resort in Chandler, AZ since 2013. Don’s passion was agriculture, and he operated a grain farm and livestock feeding operation. Throughout his life he was involved in 4 H, the Carroll County Beef Producers, and the Iowa Cattlemen’s Association, among other organizations. He served as a director of the Farm Bureau, was named an Iowa Master Pork Producer, and was honored as Outstanding Young Farmer by the Carroll Jaycees in 1960. Don felt it was important to develop new agricultural opportunities, and advocated for soil conservation, ethanol, and wind energy. In 2010 Don and Lois moved to Carroll, where Don enjoyed golfing, playing cards, visiting residents at the St. Anthony Nursing Home, and continuing to work on the family farm. In 2014 Don was honored to be named an “Iowan of the Day” by the Iowa State Fair Foundation and also enjoyed the Military Honor Flight to Washington, DC with other area veterans. He was an avid supporter of local sports teams, and in 2016 was named to the 16” Softball Hall of Fame as the Super Fan of the Year. Don and Lois shared a rich life, working hard together but enjoying travel and sharing the joys of their many friends and family members. Don is lovingly remembered by his wife of 63 years, Lois Hinners of Carroll, six children: Karen (Mike) Norton of Mitchellville, Dale (Susan) Hinners of Manning, Joan Hinners (Thomas Boyd) of Pleasant Hill, Alan (Suzanne) Hinners of Tempe, AZ, Jim Hinners of Chandler, AZ, and Jennifer (Jim) Brockpahler of Ames, IA; seven grandchildren; fourteen great-grandchildren; five siblings: Marjorie (Ray) Hacker of Halbur, Arden (Judy) Hinners of Carroll, Larry (Della) Hinners of Manning, Richard (Helen) Hinners of Carroll, Jack (Lois) Hinners of Manning; brother-in-law Henry Darveaux of Pipestone, MN, and sister-in-law, Margaret Hinners of Manning, as well as many nieces, nephews, other extended relatives, and friends. Don was preceded in death by his parents; his daughter, Diane; brother, Vernon Hinners; sisters, Jeanette Eischeid and Dolores Darveaux; brother-in-law, Ted Eischeid, and sister-in-law, Jan Hinners.

Donald Hinners, 87 of Carroll and formerly of Manning, died Sunday morning, July 9, 2017 at his home in Carroll surrounded by his family. Mass of the Christian Burial will be celebrated at 10:30 a.m. Thursday, July 13, 2017 at St. Augustine... View Obituary & Service Information

The family of Donald Hinners created this Life Tributes page to make it easy to share your memories.

Donald Hinners, 87 of Carroll and formerly of Manning, died Sunday...