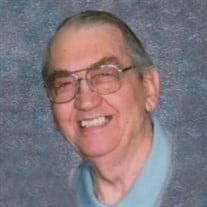 Donald Ray Hagedorn, age 89, peacefully passed away at home in the morning on Sunday, October 31, 2021. His family surrounded him with love and attention in his last days. A private funeral service will be held on Friday, November 5, 2021, at the Sharp Funeral Home in Carroll with Peg Scheidt officiating. Burial will be in the Manning City Cemetery. Funeral arrangements are under the guidance of the Sharp Funeral Home in Carroll and online condolences may be left for the Hagedorn family at www.sharpfuneral.com. Don was born March 21, 1932, in Manning, Iowa to Herman Hagedorn and Ann (Vinke) Hagedorn. He joined a sister Norma (Ralph) Osborn and another sister, Barbara (Fred) Stepanek, followed. He served one tour of duty in the Air Force. After his service he returned to Carroll and helped run the family restaurant, The Coffee Shop. He was deeply devoted to Charlotte (Lambert) Hagedorn whom he married in Carroll, Iowa on October 16, 1954, at St. Joseph’s Catholic Church. Don drove a truck on a regular run to Chicago. His cherry wine was one of the features of many holiday dinners and weddings. He was an avid gardener and loved to cook. He also enjoyed walking to the Rec Center and swimming, walking the trails at Swan Lake, and watching almost any sports, especially the NBA. Don and Charlotte had six children: Those surviving include, Ann (Scott) Condon of Carbondale, Colorado; Jane (James) Uhlenkamp, of Mount Ayr, Iowa; Donald (Lori) Hagedorn of Breda, Iowa; Dr. David (Stacy) Hagedorn of Cedar Falls, Iowa; and Jennifer (Michael) McGuane of Omaha, Nebraska; his son-in-law, Rick Wathen of State Center, Iowa; Don is also survived by 15 grandchildren, and 14 great-grandchildren. He was preceded in death by his wife Charlotte; his daughter Mary Wathen; a grandson, Tyler; his father and mother; his sister and brother-in-law Norma and Ralph Osborne; and sister and brother-in-law Barbara and Fred Stepanek.

Donald Ray Hagedorn, age 89, peacefully passed away at home in the morning on Sunday, October 31, 2021. His family surrounded him with love and attention in his last days. A private funeral service will be held on Friday, November 5, 2021, at... View Obituary & Service Information

The family of Donald Hagedorn created this Life Tributes page to make it easy to share your memories.

Donald Ray Hagedorn, age 89, peacefully passed away at home in...

Send flowers to the Hagedorn family.