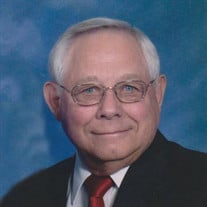 Donald F. Tigges, 90 of Carroll, died early Monday morning, December 28, 2020 at Accura Healthcare of Carroll. He was surrounded by close family and those who cared for him. Mass of the Christian Burial will be celebrated at 10:30 a.m., Thursday, December 31, 2020 at St. John Paul II Parish - Holy Spirit Church in Carroll. The Celebrant will be Fr. Kevin Richter. Music will be by Jane Heithoff. Lectors for the Funeral Mass will be Tyler Tigges and Rachel Tigges. Casket Bearers will be Don's family. Burial will be in Mt. Olivet Cemetery in Carroll with Military Honors conducted by the Carroll American Legion. A public viewing without greeting the family will be held from 9:30-10 a.m. on Thursday at the church. Those attending are required to wear a face covering and abide by current social distancing guidelines. Should one desire, memorials may be mailed to Donald F. Tigges Family, c/o Sharp Funeral Home, 226 W. 8th St. Carroll, IA 51401. A recording of Don’s funeral will be available 24 hours following the service at Sharp Funeral Home, Carroll, Iowa YouTube page. Funeral arrangements are under the guidance of the Sharp Funeral Home in Carroll and online condolences may be left for Don's family at www.sharpfuneral.com. Donald was born on April 16, 1930, at St. Anthony Regional Hospital in Carroll, Iowa, to Alphonse and Elizabeth (Scharfenkamp) Tigges, and grew up on a farm north of Willey, Iowa. He attended grade school in Willey and graduated from Carroll High School in 1948. Don worked on the family farm until he was drafted into the Army, serving from January 1952 until his honorable discharge in December 1953, with active duty in the Korean War. He remained a dedicated and active member of the Carroll American Legion, where he frequently served as an honor guard member, and for a term, the role of Commander. After his return from the war, Donald met Mary Hanlon in Omaha, NE, and they were married on November 19, 1955 at St. John's Church at Creighton University in Omaha. They moved to a farm north of Willey, Iowa. Don was a dedicated farmer while Mary worked as a registered nurse in Carroll for many years. His life was full, with many close family members nearby on the farm, as well as many visits to his in-laws, nieces, and nephews in Omaha. His life was defined by dedication to the farm, his family, and many great friends. After years on the farm, Don and Mary moved to Carroll. He continued to be connected to farming and eventually took employment at Frigidaire Transmission in Jefferson for a number of years. In retirement, he enjoyed working as a delivery driver for the Carroll Apothecary until 2009, when he suffered a stroke. He was cared for at home for a number of years and entered the nursing home in 2014. The family is extremely grateful to the many loving and dedicated workers who took care of him. His interest and engagement in life on the farm remained until his last days. Don's sense of humor and mischievous grin will be fondly remembered by all who loved him. Donald is survived by: his wife of 65 years, Mary, and their four children, Brian Tigges and his wife Michelle(Rupiper) of Johnston, Marty Tigges of Arcadia, Kristie Tigges, of Minneapolis, MN, and Anne Tigges of Carroll; two grandchildren, Tyler Tigges and his wife Meaghan of Urbandale, and Rachel Tigges of New York, NY; four great- granddaughters, Mairin, Sloane, Camryn, and Quinn Tigges; his sisters, Ruth Ann Tigges of Carroll, Carolyn Sovich of Ormond Beach, FL, Mary Jane (Morrie) Schenkelberg of Sioux City, and Rosalie (Jon) Davis of Reed Springs, MO; and his sisters-in-law Mary K. Tigges, and Velma Tigges; and many extended family members, cousins, nieces and nephews. He was preceded in death by his parents, Alphonse and Elizabeth, brothers Walt and Jerry Tigges, mother-in-law Bernice Hanlon, brothers-in-law Frank Sovich and Edward Hanlon, and sister-in-law Alyce Hanlon.

Donald F. Tigges, 90 of Carroll, died early Monday morning, December 28, 2020 at Accura Healthcare of Carroll. He was surrounded by close family and those who cared for him. Mass of the Christian Burial will be celebrated at 10:30 a.m., Thursday,... View Obituary & Service Information

The family of Donald F. Tigges created this Life Tributes page to make it easy to share your memories.