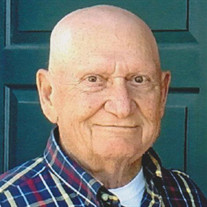 Donald Brown, 78 of Carroll, died Sunday, July 9, 2017 at St. Anthony Regional Hospital in Carroll surrounded by his family. Funeral services will be held at 10 a.m. Wednesday, July 12, 2017 at the Sharp Funeral Home in Carroll. Officiating will be Fr. Brian Feller. Honorary Casket Bearers will be: George Crouse, Kenny Crouse, Jim Mielk, Dan Hannasch, Wayne Bellinghausen, Branden Brown and Zebulon Miller. Casket Bearers will be: Jacob Oaks, Dustin Oaks, Joshua Brown, Colton Brown, Zackery Miller and Devon Bauer. Burial will be in the Carroll City Cemetery with military honors conducted by the Carroll American Legion. Friends may call at the Sharp Funeral Home in Carroll after 4 p.m. on Tuesday where there will be a rosary at 7 p.m. Additional visitation will also be held one hour prior to services on Wednesday at the funeral home. Funeral arrangements are under the direction of the Sharp Funeral Home in Carroll and online condolences may be left for Don’s family at www.sharpfuneral.com. Born on March 16, 1939 at Ft. Dodge, Iowa, Donald Wayne Brown was the son of Steven James and Esther (Thornburg) Brown. Don graduated from Brownsburg High School in Brownsburg, Indiana and following his formal education entered the United States Navy. After his honorable discharge he moved to the Carroll Community and was united in marriage to Janet “Brownie” Bellinghausen on February 2, 1963 at St. Francis Catholic Church in Maple River. The couple made their home in Carroll where Don was employed with Crouse Cartage Company as a diesel mechanic for 37 years. He enjoyed bowling, fishing, playing cards, spending time with his family; teaching his grandkids that the very first fish you catch you have to kiss for good luck. The proudest moment for Don was finally teaching his wife how to fish. Don is survived by his wife Janet Brown of Carroll; his children: Joan (Ben) Miller of Ankeny, Joe (Shawn) Brown of Carroll, JoAnn Oaks of Urbandale, and Jennifer (Bob) Bauer of Mt. Carmel; 12 grandchildren; 2 great-grandchildren; his brother: Richard (Mary) Brown of Ft. Dodge; his sisters: Regina Dye of Indiana and Anne Thomas of Indiana; his sisters-in-law and brothers-in-law: Mary Marvin Bellinghausen of Carroll, Alvina Beyer of Florida, Cindy Irlbeck of Carroll, Marlene Nelsen of Milford, Mary Bolan of Carroll, Agnes (Bob) Henkenius of Carroll, Wayne (Sharon) Bellinghausen of Carroll, Polly Bellinghausen of Mason City and Dorothy Bellinghausen of Carroll; as well as other extended relatives and many friends. Don was preceded in death by his parents; his daughter in infancy, Carolyn Brown; his granddaughter in infancy, Maranda Brown; and his brothers, George, Art, Cal, Howard, Chester, and Bob Brown.

The family of Donald Brown created this Life Tributes page to make it easy to share your memories.

Send flowers to the Brown family.