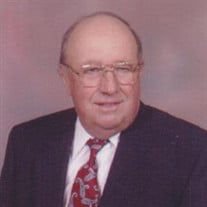 Don Rowe, age 88, of Breda, died Monday, March 7, 2022 at his home in Breda. Mass of the Christian Burial will be celebrated at 11 a.m. Friday, March 11, 2022 at St. Bernard’s Catholic Church in Breda. The celebrant will be Fr. Timothy Friedrichsen. Music will be by Marilyn Hundling and the St. Bernard’s Choir. Lector will be Sue Ausman. Gift Bearers will be Don’s Nieces and Nephews. Eucharistic Minister will be Mark Hoffman. Casket Bearers will be Tom Van Erdewyk, Daryl Reiling, Dale Reiling, John Koster, Rich Mueggenberg, Russ Knobbe and Josh Hoffman. Burial will be in the parish cemetery with military honors conducted by the Breda American Legion. Visitation will be held from 4-6 p.m. on Thursday at St. Bernard’s Church in Breda. There will be a rosary prayed at 5 p.m. and a Christian Wake Service will be held at 6 p.m. Visitation will resume at the church on Friday morning from 10-10:45a.m. Funeral arrangements are under the guidance of the Sharp Funeral Home in Breda and online condolences may be left for Don’s family at www.sharpfuneral.com. Don, the son of Harry C. and Mary A. (Pinnekamp) was born on June 2, 1933, in Carroll County, Iowa. He received his early education from St. Bernard’s Catholic School in Breda, graduating in 1950. After high school Don started his lifelong farming career. In 1958 Don was inducted into the United States Army honorably serving for nearly two years. Upon his honorable discharge he returned to the area and continued farming. On November 19, 1977 Don was united in marriage to Mary Ann Van Erdewyk at St. Bernard’s Catholic Church in Breda. The couple made their home east of Breda where he operated his grain and Holstein Dairy Cattle Operation. Don would later move his cattle operation to a Cow-Calf Herd. In 1990 the couple moved into Breda. Although they moved to town, Don still was active with the grain operation. Don was a lifelong member of St. Bernard’s Parish in Breda, the Breda American Legion actively volunteering with the Breda 4th of July Celebration, and Breda Catholic Order of Foresters. Don is survived by his wife of over 44 years Mary Ann Rowe of Breda, his twin sister Donna Mae Reiling of Auburn, his brothers-in-law, and sisters-in-law: Marlene Rowe of Harrison, Arkansas, Ruby (Frank) Rosener of Vail, Gerald (Katie) Van Erdewyk of Breda, Joyce Goetzinger of Denison, Leo F. (Deb) Van Erdewyk of Underwood; as well as many nieces, nephews, and other extended relatives. Don was preceded in death by his parents; siblings: Katherine (Ray) Wernimont, Frances (Ed) Rosener Baumhover, Mary (Richard) Reiling, Lois Brown, Vernon Rowe, and Norman Rowe; brother-in-law Don Reiling, sister-in-law: Betty (Virgil) Neumayer, an infant brother-in-law Keith Van Erdewyk.

The family of Don Rowe created this Life Tributes page to make it easy to share your memories.

Send flowers to the Rowe family.