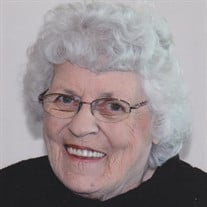 Dolores M. Pudenz, age 85, of Carroll, died Friday evening April 28, 2017 at Regency Park Nursing Home in Carroll. Mass of the Christian Burial will be celebrated at 11 a.m. Wednesday, May 3, 2017 at Holy Spirit Catholic Church in Carroll. The Celebrant will be Fr. Timothy Johnson. Music will be by Barb McDermott and the Holy Spirit Choir. Mass servers will be Andrew and Jessica Walker. Lectors will be Marcy Clark and Abby Pudenz. Gift bearers will be Beth Bell, Becky Harvey, Susie Cravens, Marcy Clark, and Julia Soyer. Eucharistic Minister will be Corinda Walker. Casket bearers will be Chad Walker, Jon Walker, Andrew Pudenz, Jacob Miner, Jeremiah Miner, Jager Pudenz, Justin Soyer, and Jon Soyer. Burial will be at Mt. Olivet Cemetery in Carroll. Friends may call at the Sharp Funeral Home in Carroll, after 4 p.m. on Tuesday where there will be a Rosary prayed at 5 p.m., and a Christian Wake Service will be held at 7 p.m. The casket will be moved to Holy Spirit Church on Wednesday morning where visitation will resume at 10 a.m., and continue until the time of the funeral mass. Funeral arrangements are under the direction of the Sharp Funeral Home in Carroll, and online condolences may be left for Dolores’ family at www.sharpfuneral.com. Born on June 28, 1931 at Carroll, Iowa, Dolores was the daughter of Lawrence and Mary (Kanne) Wieland. She grew up in the Carroll area, and graduated from St. Angela’s Academy. On October 5, 1950, Dolores was united in marriage to LaVern “Bud” Pudenz at St. Joseph’s Catholic Church in Carroll. The couple made their home near Manson, Iowa for a brief time before returning to Carroll County where Dolores was a devoted homemaker, and assisted Bud in the family’s grain and livestock farming operation. After their retirement from farming in 1975, the couple purchased a resort in Bemidji, Minnesota. Dolores and Bud operated the resort until Bud’s passing in 1999, when Dolores returned to Carroll. Dolores enjoyed Elvis Presley, gardening, watching westerns, her grandchildren, and great-grandchildren. She also enjoyed quilting, as she made a quilt for each grandchild, and great-grandchild. Dolores was a member of Holy Spirit Parish in Carroll. Left to celebrate Dolores life are her children: Jean (Keith) Walker of Paton, Mark (Patty) Pudenz of Odessa, MO, Rick (Helen) Pudenz of Glidden, Gary Pudenz of Lytton, Mary Jo (Bill) Rice of Ft. Wayne, IN, and June (Paul) Carstensen of Cambridge; a daughter-in-law: Cindy Pudenz of Glidden; fifteen grandchildren, eighteen great-grandchildren, and five great-great-grandchildren; her siblings: Donald (Evie) Wieland of Carroll, Paul (Rainy) Wieland of Carroll, and Beatrice (Richard) Pudenz of Carroll; as well as many nieces, nephews, other extended relatives, and her Sunnybrook family. Dolores was preceded in death by her parents; her husband Bud Pudenz in 1999, her son David Pudenz in 2013, a daughter: June Marie in infancy, a daughter-in-law: Deb Pudenz, and her sisters: Maxine (Leon) Schultes, and Sister Marian Wieland, FSPA.

The family of Dolores Pudenz created this Life Tributes page to make it easy to share your memories.