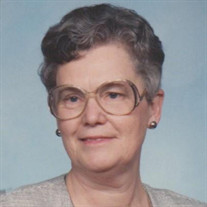 Dolores Koster, age 91, of Breda, died Thursday evening, October 15, 2020, at St. Anthony Regional Hospital in Carroll. Mass of the Christian Burial will be celebrated at 10:30 a.m., Thursday, October 22, 2020, at St. Bernard’s Catholic Church in Breda. The celebrant will be Fr. Timothy Pick. Music will be by Marilyn Hundling. Lector will be Carol Thobe. Casket Bearers will be Barry Koster, Alex Koster, Ben Pauli, Josh Neumayer, Tyler Thomasson, and Lucas Thobe. Burial will be at St. Bernard’s Cemetery in Breda. Public Visitation without the family present will be held from 6-7 p.m. on Wednesday at the Sharp Funeral Home in Breda. There will be no public visitation before the funeral mass on Thursday morning. Those in attendance of both the visitation and funeral mass are required to wear a face mask and abide by COVID-19 Guidelines. A livestream of the funeral mass will be available at the time of the service on the St. Bernard’s Catholic Church Facebook Page at www.facebook.com/ChristTheKingCathollicCommunityBredaIowa/. Those wishing to mail a memorial may direct it to Dolores Koster Family, C/O Sharp Funeral Home, 226 W. 8th Street, Carroll, IA 51401. Funeral arrangements are under the guidance of the Sharp Funeral Home in Breda, and online condolences may be left for Dolores’ family at www.sharpfuneral.com. Dolores, the daughter of Herman and Eleanora (Koenig) Heinrichs, was born on April 20, 1929, in Halbur, Iowa. She grew up in Arcadia and graduated from Arcadia High School. After her formal education, Dolores worked as a bank teller for the Farmers State Bank in Halbur. On May 22, 1951, Dolores was united in marriage to Donald Koster at St. Bernard’s Catholic Church in Breda. The couple made their home near Breda where they farmed, and Dolores was a devoted homemaker. After the children were raised, she worked at the Knights of Columbus Hall, helped in the Kitchen at St. Bernard’s School, embroidered at the Graphic Edge, and helped at Zeke’s and Mary Kay’s Corner in Breda. Dolores enjoyed her multiple card clubs, gardening, baking, and watching her children and grandchildren play sports. One of her proudest accomplishments was being the first women’s basketball coach for St. Bernard’s High School. Dolores also enjoyed sewing and was known for her beautiful work as a seamstress, making many beautiful wedding dresses and quilts. Dolores had a deep devotion to her Catholic faith, attended mass frequently, and volunteered her time with the St. Bernard’s Church Ladies Guild. Dolores is survived by her children, Jerry (Dee) Koster of Breda, Joanie (Craig) Neppel of Aurora, IL, Tom (Cindy) Koster of Omaha, Kathy (John) Pauli of Carroll, Sharon (Mark) Neumayer of Omaha, Mary Jo (Bill) Thomasson of Iowa City, and Carol (Mike) Thobe of Carroll; 24 grandchildren; 28 great-grandchildren; her siblings, Marvin (Maxine) Heinrichs, Richard Heinrichs, and Maury (Meg) Heinrichs; her sister-in-law: Bernadine Heinrichs; and her brother-in-law, Roger Koster; as well as many nieces, nephews, and other extended relatives. Dolores was preceded in death by her parents, Herman and Eleanora Heinrichs; her husband, Donald Koster (1996); her son, Glenn Koster (2020); her siblings, Cyril Heinrichs, Harold Heinrichs, Cletus (Ruth) Heinrichs, Janice (Denny) Loew; her father-in-law, William Koster, and her mother-in-law, Matilda Koster; her brothers-in-law and sisters-in-law, Mary Heinrichs, Bill (Loretta) Koster, Walt (Viola) Koster, Velma (Bob) Blum, Kermit (Elsie) Koster, Doyle (Bernice) Koster, Darlene Koster, and LeRoy (Joanell) Koster.

The family of Dolores Koster created this Life Tributes page to make it easy to share your memories.