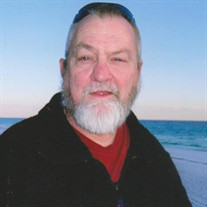 A recording of the service can be found at this link: https://youtu.be/MU09PfB_FQM Due to the latest mitigation efforts the funeral arrangements for Dick have been changed. No public visitation will be held on Thursday. Private visitation only. Funeral mass will remain private. The graveside service will still be public, however strict adherence to the Governor’s Mandate will be followed. Masks will be required in the cemetery. Dick Neumann, age 74, of Carroll, died Friday, November 13, 2020 at St. Anthony Regional Hospital in Carroll. A private Mass of the Christian Burial will be celebrated at 10:30 a.m. Friday, November 20, 2020 at St. Lawrence Church-St. John Paul II Parish in Carroll. The Celebrant will be Fr. Shinoj Jose. Instrumental music will be provided by Kate Cuddy. Lectors will be Cheyann Neumann, Kaia Neumann, and Riley Coats. Honorary Casket Bearers will be Mitchell Neumann and Paxton Neumann. Casket Bearers will be Ashley Neumann, Taylor Neumann, Devin Behrendsen, Caden Neumann, James Dirkx, John Snyder and James Bender. The public is invited to attend the burial following the funeral mass at the Carroll City Cemetery at approximately 11:15 a.m. Military Honors will be conducted by the Carroll American Legion. Weather permitting, Dick’s family will greet family and friends from 4-6 p.m. on Thursday outside of the Sharp Funeral Home in Carroll while a viewing will be held inside of the funeral home. In case of inclement weather the visitation will be moved inside the funeral home, and strict COVID-19 guidelines will be followed. Those attending services are required to wear a face covering and abide by COVID-19 restrictions. Funeral arrangements are under the guidance of the Sharp Funeral Home in Carroll, and online condolences may be left at www.sharpfuneral.com. Those wishing to mail a memorial may direct it to the Dick Neumann Family C/O Sharp Funeral Home, 226 W. 8th Street, Carroll, IA 51401. Born on October 15, 1946 in Ida Grove, Iowa, Dick was the son of Mary and Pat Thies. He spent his younger years in the Arthur area and graduated from Odebolt-Arthur High School with the class of 1965. Dick proudly served his country in the US Army, completing two tours of duty in Vietnam between 1965 and 1968. On June 19, 1970, he was united in marriage to the love of his life, Camela Breon, at Sacred Heart Catholic Church in Ida Grove. Dick and Camie remained in the Odebolt area following their marriage where they raised their children. Dick and Camie later moved to the Carroll Community where they continued to make memories for their nearly 47 years of marriage. Dick farmed many years followed by working for Bil Mar Foods in Storm Lake and later retired from Pella Corporation in Carroll. In his retirement, Dick continued his love of farming by helping out at the Dan Ackerman Farm in Sac County. Dick loved camping, especially sitting around the campfire enjoying his Old Milwaukee late into the night. Dick never lost his roots in farming and enjoyed tinkering with his 720 John Deere tractor, which he still used from time to time to rake hay. Dick also enjoyed taking his 1939 Chevy truck that he proudly restored out for drives. Always a fan of sports, you could find Dick cheering on the Steelers, Yankees, Hawkeyes, and Cyclones. Dick was a member of St. Lawrence Church in Carroll. Dick loved his family and cared deeply about his children and grandchildren. Friends and family of Dick never doubted the undeniable love and adoration he had for his Camie and now find solace in knowing they are together again. Survivors include his sons: Chad Neumann and his wife Ann of Carroll, Travis Neumann and his wife Sara of Carroll, daughter: Shannon Neumann of Carroll; his grandchildren: Ashley Neumann, Taylor (James) Dirkx, Devin Behrendsen, Caden Neumann, Riley Coats, Cheyann Neumann, Kaia Neumann, Mitchell Neumann, and Paxton Neumann; his brothers Wayne, Gerry, Don, and Bob as well as extended relatives and many dear friends. Dick was preceded in death by his wife Camela in 2017, his parents Pat and Mary Thies, siblings Lois Johnson and Michael Thies, and his mother and father-in-law Tom and Dorothy Breon.

A recording of the service can be found at this link: https://youtu.be/MU09PfB_FQM Due to the latest mitigation efforts the funeral arrangements for Dick have been changed. No public visitation will be held on Thursday. Private visitation... View Obituary & Service Information

The family of Dick Neumann created this Life Tributes page to make it easy to share your memories.

A recording of the service can be found at this link: https://youtu.be/MU09PfB_FQM

Send flowers to the Neumann family.