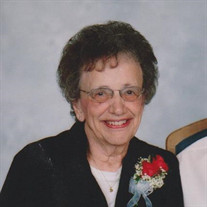 Delores Determan, 94 of Carroll, died Tuesday, July 11, 2017 at Mercy Medical Center in Des Moines, Iowa. Mass of the Christian Burial will be celebrated at 10:30 a.m. Monday, July 17, 2017 at St. Lawrence Catholic Church in Carroll. The celebrant will be Fr. Timothy Schott. Music will be by Kate Cuddy and the St. Lawrence Choir, with Delores’ grandchildren singing “Amazing Grace”. Lectors will be Jennifer Wieseler, Angela Berndt, and Megan Eischeid. Gift Bearers will be Carter Eischeid, Michelle Determan, and Lindsay Determan. Eucharistic Ministers will be Rachel Eischeid, Jean Knobbe, and Bonnie Danner. Honorary Casket Bearers will be Dr. Robert Wagner and Jerome Schramm. Casket Bearers will be Jim Trucano, John Determan, Patrick Volkir, Scott Determan, Keith Seier, Matt Determan, Jon Hagen, and Kevin Seier. Burial will be at 1:30 p.m. at Sacred Heart Cemetery in Early, Iowa. Friends may call at the Sharp Funeral Home in Carroll after 3 p.m. on Sunday where there will be a Carroll Catholic Daughters of the Americas Rosary prayed at 4 p.m., and a Christian Wake Service will be held at 6 p.m. The casket will be moved to St. Lawrence Church on Monday morning where visitation will resume at 9:30 a.m., and con-tinue until the time of the funeral mass. Memorials may be directed to the Joe and Delores Determan Memorial Fund Scholarship at the Kuemper Catholic School System in Carroll. Funeral arrangements are under the direction of the Sharp Funeral Home in Carroll, and online condolences may be left for Delores’ family at www.sharpfuneral.com. Delores, a daughter of Gustav and Gertrude (Heinrich) Schramm, was born May 6, 1923 in Early, IA and graduated from Sacred Heart School there in 1941. She attended Briar Cliff College for one year until meeting the love of her life. She and Joe Determan were married June 2, 1942 at Sacred Heart Church in Early. During their lifetime, Delores and Joe lived in 13 homes in 6 towns in 4 states. They farmed in Early until 1964, then they moved to Carroll, then to Bellevue, Nebraska where Delores worked for Dr. Dewey in Omaha. Next was a move to Bella Vista, Arkansas. Then in the 80's was the move back to Carroll with winter travels back and forth to Apache Junction, Arizona. Delores was very active in the Catholic Church and community in every town she lived in. In 1974, Delores was honored by the Omaha Chamber of Commerce for her leadership roles in her home community. She was chairman of the Carroll County Extension Home Economics Committee, president of Catholic Daughters of America, St, Lawrence Guild, St Anthony's Auxiliary. Delores and Joe were married 65 years, had thirteen children, 35 grandchildren, 46 great-grandchildren and 4 great-great-grandchildren. Survivors include 11 children and their spouses: JoAnn Jensen of Des Moines, Don (Mary) Determan of Ft Pierce, FL, Jean (Jerry) Blum of Auburn, IA, Bobbi (Bill) Seier of Loudon, TN, Patricia (H.L.) Adams of Winter Haven, FL, Mary (Ron) Hagen of Rice Lake WI, David (Jeanne) Determan of Sioux City IA, Michael (Stephanie) Determan of Phoenix, AZ, Robert (Angie) Determan of Bellevue, NE, James (Marjorie) Determan of Lincoln, NE, and Thomas (Janna) Determan of Lakeland, FL ; 35 grandchildren, 46 great-grandchildren and 4 great-great grandchildren, a brother Jerome (Ramona) Schramm of Early, IA. Mrs. Determan was preceded in death by her husband Joe; an infant son John Determan; a daughter Diane Klocke; her parents, Gus and Gertrude Schramm; 2 brothers, Robert Schramm, Donald Schramm; 1 infant sister Betty Lou Schramm; one son-in-law: Ronald Jensen; one great-grand child, Ian Lomasney; one grand son-in-law Joe Lampe.

The family of Delores Determan created this Life Tributes page to make it easy to share your memories.

Send flowers to the Determan family.